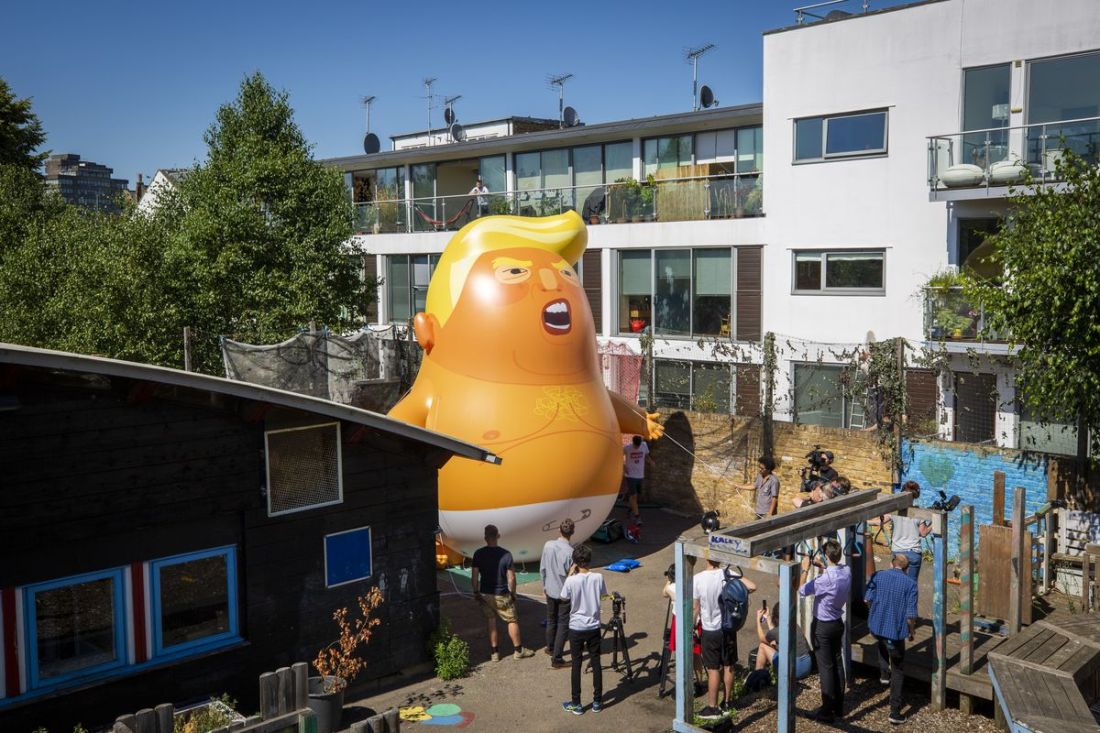 Look up in the sky! It’s a bird! It’s a plane! It’s a balloon shaped like the President of the United States as a baby, and it’s going to fly over London in honour of his visit to the United Kingdom! We’re going to try and stay grounded on this week’s Open Sources Guelph, but we’ll still be looking over matters provincially and globally on this edition of the show. We’ll check on the Throne Speech here in Ontario, consider our own border issues here in Canada, and then go international with the man who inspired the balloon, and the internal political strife of one of the places he’s visiting.

This Thursday, July 12, at 5 pm, Scotty Hertz and Adam A. Donaldson will discuss:

A Doug’s Life. Premier Doug Ford announced last week that the Ontario legislature would be recalled on July 11, and there would be a Speech from the Throne on July 12. Hey! That’s when we broadcast this episode of the show. Yes, we will bring you highlights from the speech, but the new government has already announced their priorities: they’re going to ensure a “quick and fairly resolved” decision on the job action at York University, repeal cap and trade, and cancel the White Pines Wind Project. In the meantime, Ford’s given a plum assignment – and six-figure salary – to his party’s president, and the “$6 Million Man” still has a job (?). We’ll have the latest from Ford Province.

The Immigrant Wrong. While there’s been a lot of attention paid to the issues at the southern border of the U.S., Canada’s got plenty of problems with our own southern border and our immigration system. The number of temporary visas refused by Immigration, Refugees and Citizenship Canada (IRCC) is on the rise, Toronto Mayor John Tory is begging for more help when it comes to resettling refugee claimants, and the new Ontario government has washed its hands of the entire affair. We’ll break down the problems with Canada’s own border and immigration issues, and look at how we’re handling, or mishandling, the situation.

Trump Vs the World. President Donald Trump announced his Supreme Court pick on Monday night, and it was just the beginning of a very busy week for our favourite bumbling racist president. After Monday night’s pomp, it was off to Europe for a NATO summit where Trump would wag his finger at the other members for not spending enough money on defense. After that, he was off to London for tea with the Queen and to hopefully stay out of sight of the mean protestors with the giant Trump as baby in diaper balloon. But then, Trump will get the meeting he’s been dying for, a summit with Vladimir Putin! So what will the damage be when Hurricane Trump blows through Western Europe.

A Boris Line. Within the space of 24 hours, two senior members of Theresa May’s cabinet resigned, just as she was about to announce the completion of a plan for the U.K.’s exit from the European Union. Why, because, as Brexit Secretary David Davis put it in his resignation letter, the policy is “at best a weak negotiating position, and possibly an inescapable one.” The other resignation was Foreign Secretary Boris Johnson, who was one of the most enthusiastic voices in favour of Brexit, and would be one highly disgruntled man if May went for the “soft” Brexit that still promoted ties to the continent. So why the fallout, and can May survive this fracturing of her caucus?