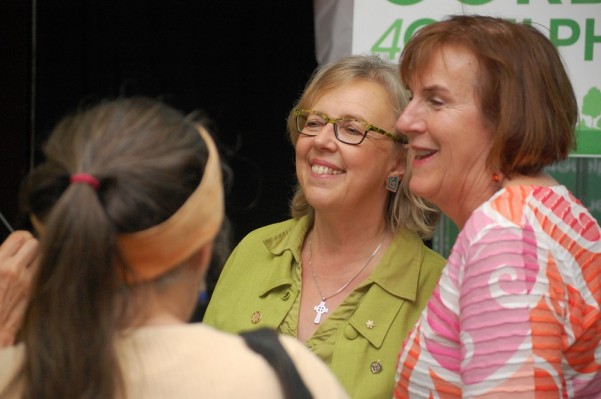 You may have heard this interview on last Thursday’s Open Sources Guelph, but even if you’ve heard it already, you may now be interested in watching it. As you may recall, Green Party of Canada leader Elizabeth May was in Guelph a week ago Monday for the nomination meeting to choose Guelph’s candidate in the upcoming Federal Election. Former Environmental Commissioner of Ontario Gord Miller took the nomination easily running unopposed, so the mood was understandably jubilant. The reason? Greens in Guelph, and across the country, are banking on the idea that May’s 2011 victory in Saanich-Gulf Islands will be the first of many more electoral victories in 2015. After the night’s business was done, Open Sources got a few minutes to talk to May about electoral strategy and Green ambitions for Guelph this October.