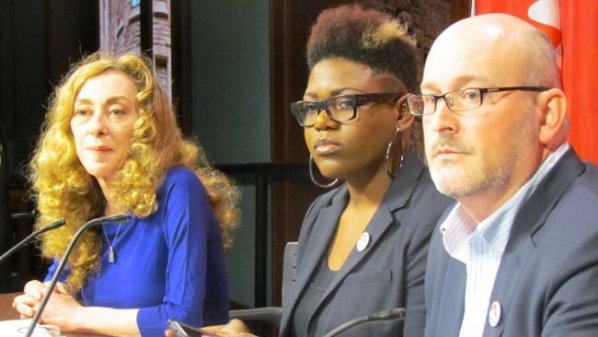 The state of Open Sources Guelph this week is strong. We will be dealing bigly with the latest developments of the Trump administration south of the border, including a speech to the joint session of Congress where the President sounded – gasp! – presidential. Meanwhile in our own backyard, things are not looking too rosy for the Ontario Liberals, but can they turn it around in the next year? Then, in the second half of the show, we’ll talk about being the best activist you can be with a very special guest, and we’ll then look into the ugly face of rising of hatred across all borders.

This Thursday, March 2, at 5 pm, Scotty Hertz and Adam A. Donaldson will discuss:

1) The Blame Game. In the hours before his first speech to a joint session to Congress, President Donald Trump was desperately trying to find someone to blame for all the things that are ailing him, and it’s his predecessor: Barack Obama. Leaks from the administration? Obama’s fault. Protestors across the country? Obama’s fault. Dead Navy Seal and failed operation in Yemen? Yup, you guessed it, Obama did it. Obama is doing more sabotage than the Beastie Boys, which is amazing for someone who’s been on vacation since leaving office. Meanwhile, healthcare reform is going nowhere fast and the President just can’t seem to shake those pesky ties to Russia… Trump, Week 6, rolls on.

2) The Wynne-ter of Discontent.  This time next year, we will be eagerly awaiting for the writ to be dropped and the beginning of the Ontario Provincial Election, and if one poll is to be believed, the Liberals may be on their way out after 15 years in power. There’s been some suggestion that Kathleen Wynne and her party is not just looking at a loss next June, but a massive loss, perhaps even to third party status. But not so fast! The Grits have been down and out before, and let’s be honest, the Conservative leader hasn’t had a chance to stick his foot in his mouth yet to ruin his parties chances. Still, with Hydro rates being a hot topic, a kitchen table issue ready to burn the government, will this be a long decline for Wynne and the Liberals?

3) Crackdowns and Creativity. This weekend, the Ontario Public Interest Research Group (OPIRG) is holding a weekend of talks and panels to help activists, protestors and agitators deal with this crazy new political reality we all live in. One of the special guests is Akio Maroon of Black Lives Matter Toronto. Akio Maroon is an internationally recognized Human Rights Advocate with a focus on advocacy in Equity, Anti-Oppression and Inclusion, Social Justice and Harm reduction support systems, and Maroon has been a part of BLM’s recent protest to take Toronto Pride back to its activist roots, and was recently elected to its board. We’ll talk to Maroon about community organizing, being at the forefront of fighting anti-black racism, and how we can find new ways to get active on the issues we care about.

4) The Grateful Hate. Hundreds of bomb threats to Jewish community centres, two Jewish cemeteries vandalized and a pair of India-born engineers being shot at a bar-and-grill in suburban Kansas City after being told to “Get out of my country” by a pistol packing patriot who thinks brown skin equals Iranian. The Southern Poverty Law Centre says that there have been 900 reported hate incidents since Donald Trump’s election in November, and there was a similar uptick in the U.K. after the Brexit vote.  Even Canada has not escaped the trend, just look at the shooting death of six people in a mosque in Quebec. It would be inappropriate to lay the total blame on Trump and his allies, but the rhetoric, or lack there of, has done nothing to stem the tide. So in lieu of leadership, what can be done about the rise of hate?