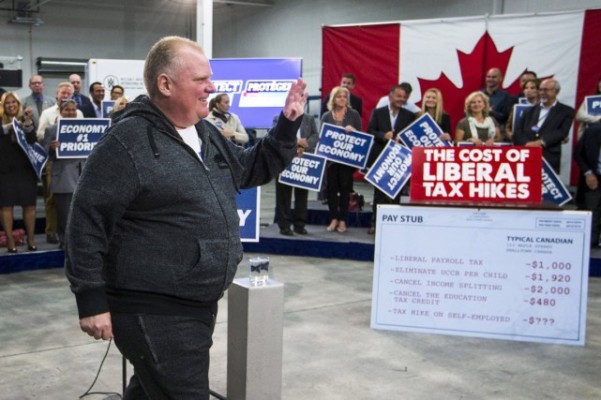 I’ve already commented on Stephen Harper’s apparent segue to prop comic while campaigning in this election, and it’s enough to make you wonder if given the polls he’s pondering his post-prime ministerial career. Perhaps as a game show host. Compounding the silly season move to campaign with a comically-exaggerated, old-timey cash register is a growing sense that Harper, while losing the race, is losing his mind, because why else would he be slamming the Liberal plan to decriminalize marijuana on the one hand, while appear at an event with a known drug user and his alleged drug dealing brother on the other?

Shortly before pizzeria owner Dino Ari stepped up to play “The Price is Not Ready” with your host Prime Minister Harper, the media was aghast when into the factory floor of the Etobicoke business that the campaign was being held at, was former Councillor Doug Ford and his brother, the former Mayor Rob Ford. The Fords took a seat in the front row of the event, but discreetly left as Harper was thanking the handpicked cast of extras included at the under-populated press event. Meanwhile, the reporters in Etobicoke and the folks watching at home were forced to ask themselves, did that just happen?

Yes, it did. As Maclean’s commentator Paul Wells pointed out, the campaign that began with the Conservatives painting Liberal leader Justin Trudeau as a feather-weight politico with nice hair, well-meaning slogans, and not much else now sees the incumbent, “campaigning with props, sound effects and 300 lb. of entropy in a track suit.”

The re-appearance of the Fords on the national political scene would have been surreal enough, but today it was reported that Conservative campaign ads published in Chinese and Punjabi-language newspapers in Toronto and Vancouver are telling readers that a vote for Trudeau is a vote for children getting access to pot and putting a brothel on every corner.

The Conservatives, conveniently, don’t comment on campaign advertising, but in a written comment to the CBC Harper said, “Justin [Trudeau] refuses to acknowledge the damage that drugs do to families and communities. He wants to allow the sale of marijuana in corner stores and increase the number of heroin injection sites, dangerously misguided policies that would only make drugs more accessible to our children.”

Keep in mind, this is a man who just appeared yesterday with a man that confessed to smoking crack cocaine with gang members, and his brother, who allegedly spent his youth in the 80s selling hash in strip mall parking lots in suburban Toronto. One might think that message might not resonate well with families and people concerned about children thinking it’s cool to abuse drugs, after all, the “crack smoking mayor of Toronto” is about as famous now as Peyton Manning and Ariana Grande.

But if there’s one thing that the Fords still have it’s street cred. Doug, after all, came within 64,000 votes of beating John Tory for Toronto Mayor last fall, and Etobicoke, homebase for the Fords, is just the sort of riding that Harper and the Conservatives have to hold if they want to hold on to power. And if you think that sounds cynical, let’s have CTV’s Robert Fife paint the full picture of just how truly cynical it is.

Strange then that Harper would lean on “losers” he was looking forward to seeing fall in defeat to prop him up then in these last days of Campaign 2015. Still, one could read a renewed romance with the Fords, not to mention the above mentioned intent to make new Canadians fear waves of hookers and pot heads invading their neighbourhoods, in a last ditch effort to stop a red tide. Or to put it the way Fife phrased it on CTV News Monday night:

You can see the look of rejection, of defeat on the faces of the campaign workers. They’re talking about jobs that they’re going to have to find after the election in the private sector because they know there will be no jobs for them.

And they’re also having to contend with Stephen Harper, who I’m told is in a very dark mood lately. The last two days he’s been snapping at workers and they say it’s because the thought of losing to Justin Trudeau is like a nightmare to him.

And outside the campaign you’re hearing a lot of Conservatives saying that he should not have run this time, that he let his ego get in the way like so many leaders before him.

So in the face of growing rejection, not just by Canadians in general but by his own people in particular, Harper is making a Hail Mary pass to the Ford Nation, to use the appropriate football analogy. But what about that conundrum mentioned about, a tad hypocritical isn’t it? Well that’s none of the PM’s business. “Our position on these issues are very clear. I’m not going to cast those kinds of judgments,” Harper said when reporters asked him about appearing with an admitted drug user. “Our platform is very clear and the support of that family for our party is longstanding and well known.”

That tells you nothing, doesn’t it? Where as this….

Join me and my brother Doug as we host @pmharper this Saturday, 7:30 PM at the Toronto Congress Centre #elxn42 #elxn2015