We won’t have much time to talk about it on the show today (not that there’s really anything left to say), but the infamous video that Rob Ford once famously said that he had “never seen or does not exist” is now available for all to see. With the charges this morning dropped against Ford’s friend and sometimes driver, Alexander “Sandro” Lisi, who allegedly tried to bribe and brass knuckle his way to the tape after the website Gawker revealed its existence, the most famous video of a Canadian mayor is now online and as easy to see as your nearest YouTube embed. END_OF_DOCUMENT_TOKEN_TO_BE_REPLACED 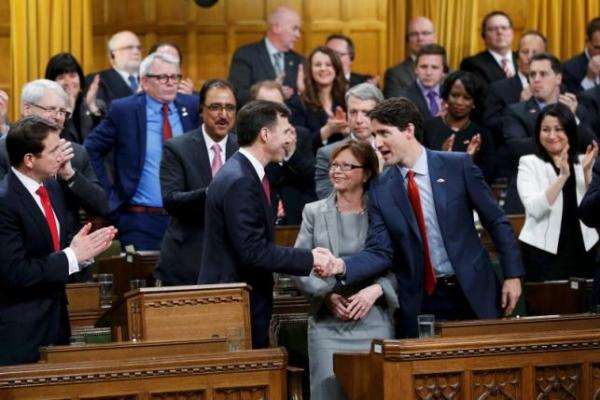 In a very busy news week, I saw a piece on the evening news that, in my mind, tied together two of the biggest stories, the untimely death of Rob Ford and the delivery of the Federal Budget. It was one of those consumer reports pieces that more often than not I find a venue for either Andy Rooney-style whining about how apples don’t cost a nickel anymore, or highlighting the bizarre naivety of the consumers they’re trying to protect. This one was more of the latter, so let’s begin by saying when you see a man selling iPhones in front of a suburban Toronto Costco, he’s not Tim Cook. END_OF_DOCUMENT_TOKEN_TO_BE_REPLACED

What a news week it was! Putting aside the Brussels attack (and we do because we can all agree that ISIS is terrible and no one deserves to die on the whim of a madman or men), it was a busy week of big stories, big decisions and big losses here for Open Sources Guelph. Consequently for everyday Canadians, there’s talk about the federal budget and its impact on our roads, and bridges, and pocketbooks… Also in Ottawa, there were money matters for the Red Chamber and the hope that there might be some class coming back there in the future. We also goodbye (hopefully) to over a half-a-century of hostility with the last enemy of the Cold War, and we say goodbye to a giant of Toronto politics who changed the landscape forever. END_OF_DOCUMENT_TOKEN_TO_BE_REPLACED

A couple of months ago, I wrote a piece in this space about how Donald Trump was not Rob Ford, but to look at the situation a different way, perhaps the best thing the American voter can do is get Donald Trump out of their system, like Toronto did with Ford. The come out of nowhere election of Ford in 2010 surprised even the most skeptical of pundits; it floored the media and the political establishment that an unpolished, unpracticed populist with a simple message and a proclivity to stick his foot in his mouth would rise to the highest office in North America’s fourth largest city. On that basis, the comparisons between Trump and Ford are easy, and that’s why we know that the only way Americans are going to shake off the siren song of winning “yuge” is by seeing what four years under Trump looks like. END_OF_DOCUMENT_TOKEN_TO_BE_REPLACED 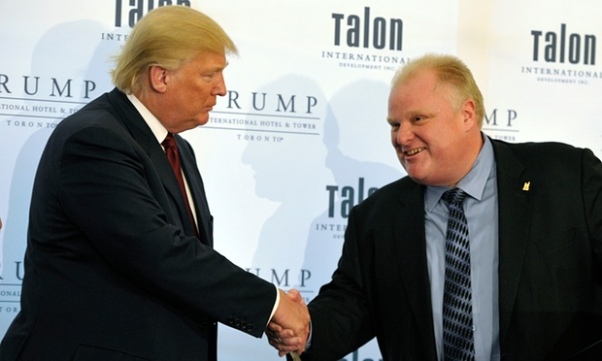 After an absence from the the political scene as he underwent his second round of cancer treatment, Rob Ford popped back up on the radar this week with an interview with his official stenographer Joe Warmington of the Toronto Sun, and a Q&A stand-up comedy routine on Twitter Wednesday. Gone are the days of nonstop Rob Ford verbal blunders, mostly because of his illnesses, but also because he’s been relegated to the relative harmlessness of his old Ward 2 council seat where he can focus on returning phone calls and casting belligerent, obstructionist votes in peace.

These days, you want outrageousness in politics, you have to look southward to Donald Trump, who just completed another week of campaigning, which mostly involved telling rabid supporters why he’s awesome and why others stink. Make no mistake though, to compare Donald Trump and Rob Ford, which many have already tried, is a grave disservice… to Rob Ford. END_OF_DOCUMENT_TOKEN_TO_BE_REPLACED

I’ve already commented on Stephen Harper’s apparent segue to prop comic while campaigning in this election, and it’s enough to make you wonder if given the polls he’s pondering his post-prime ministerial career. Perhaps as a game show host. Compounding the silly season move to campaign with a comically-exaggerated, old-timey cash register is a growing sense that Harper, while losing the race, is losing his mind, because why else would he be slamming the Liberal plan to decriminalize marijuana on the one hand, while appear at an event with a known drug user and his alleged drug dealing brother on the other? END_OF_DOCUMENT_TOKEN_TO_BE_REPLACED

Canada may be five hockey rinks surrounded by bears, but we have feelings too. It’s always big news when Canada gets a mention on an American political satire show like The Daily Show, it’s like we made it, but usually it’s when the bus goes completely off the cliff, like with the case of a certain Toronto mayor. And that’s why it was surprising that our little senate scandal got the attention of John Oliver, and he remarked on the Canadianness of our political scandals on his show Last Week Tonight. END_OF_DOCUMENT_TOKEN_TO_BE_REPLACED