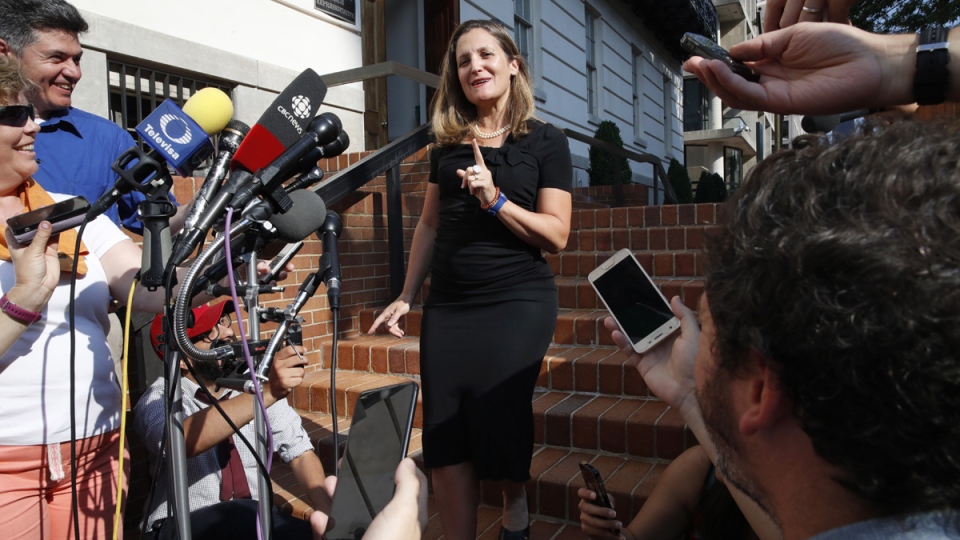 It’s Back to School Week, and that means people are getting back to the normal routine of things. This week’s edition of Open Sources Guelph is no exception, so as we head into fall, it seems appropriate to reset the clock a little (so to speak). On today’s show we’re going to update you on four big issues that have had a lot of moving parts of the last couple of weeks. In the international, we’ve got the ongoing NAFTA negotiations. In the national, we’ve still got no Trans Mountain Pipeline expansion. In the provincial, we’ve got more lawsuits for the PC government. And, in local, we’ve got a proposed suspension of bylaw enforcement.

This Thursday, September 6 at 5 pm, Scotty Hertz and Adam A. Donaldson will discuss:

Deal or No Deal. The Friday “deadline” came and went, but there was still no deal in the renegotiation of the North America Free Trade Agreement. Canada is standing firm on preferring no deal to a bad deal, but in a weekend tweet storm, U.S. President Donald Trump expressed exasperation, and a desire to move forward without Canada in a new bilateral trade pact with Mexico. All parties are hoping that cooler heads might prevail with a weekend break in talks, but there’s really no sign that the clouds are about to break in what’s been an incredibly difficult, and (in the case of Trump) temperamental negotiation. How much trouble is NAFTA really in?

Mo’ Lawsuits, Mo’ Problems. Tuesday was the first day of school across the province, so what a day for a lawsuit! The Elementary Teachers Federation of Ontario launched a lawsuit against the Ontario government over their repeal of the 2015 health curriculum update, specifically the sex education units. This is the third lawsuit to stop the Ford government’s actions on this file, actions that are still not especially clear in terms of what exactly teachers are supposed to be teaching when it comes to sex ed. Further, this is just one of several lawsuits across a myriad of files handled in Queen’s Park and this government’s barely two months old. How long can the Province keep this pace up?

No Pipeline, Big Problems. Well, the good news is that the National Energy Board has approved the Government of Canada’s purchase of the Trans Mountain Pipeline. The bad news, depending on where you sit, is that no expansion plans are moving forward because a recent court decision has sided with First Nations who say they weren’t properly consulted. So now what? Key cabinet officials had an emergency meeting on the matter earlier this week, but Alberta Premier Rachel Notley is refusing to proceed with Ottawa’s carbon tax plans until the situation is resolved. Is there any outcome for Trans Mountain that will please all sides, and how soon can it be achieved?

Don’t Drive Over My Driveway! Guelph City Council will hear a notice of motion this Monday that will suspend certain zoning provisions on driveway width from being enforced by bylaw. A rash of, some would say, Draconian enforcement of the bylaw has been occurring all over town, and residents are ready to rebel. Meanwhile, the City is doing a comprehensive bylaw review that might address some of these matters, but staff is unwilling to endorse a driveway free-for-all till its don. This will paint councillors in a tough corner having to decide between citizens and the bureaucracy, and it’s an election year no less! How will council decide, and will people like the answer?