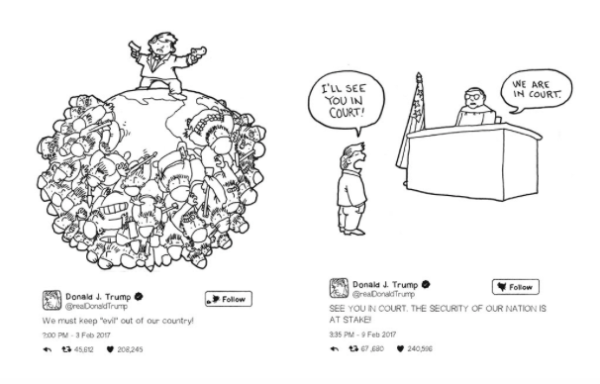 Almost a year ago, we posted about the arrival of Justin Trudeau in comic book form, and how it mirrored the comic book boom of Barack Obama when he was first elected as President in 2008. Well, the new President, Donald J. Trump, is not immune to comic book inspiration in seems, but in the case of “45” this graphic novel is hardly going to be flattering.

Shannon Wheeler, who’s an acclaimed cartoonist from The New Yorker, God Is Disappointed in You, Too Much Coffee Man, is putting together a graphic novel of illustrations set to some of President Trump’s most famous tweets. The book will be 120-pages of cartooned tweets from Top Shelf Comics, the same publisher behind The League of Extraordinary Gentlemen novels. The book will be called, Sh*t My President Says: The Illustrated Tweets of Donald J. Trump.

In Sh*t My President Says, Donald Trump’s most revealing tweets are transformed into razor-sharp cartoons, offering a subversive and illuminating insight into the mind of the most divisive political figure of our time. Whether you love him or hate him, this take on Trump will help you come to grips with the man and his ideas thanks to Wheeler’s signature mix of slapstick and sophistication.

One wonders how Trump might react to this news, although he’s got his plate full with FBI investigations, failing healthcare legislation, a difficult Supreme Court confirmation, and the day-to-day not-so-ephemera of being the leader of the Free World. Twitter though is Trump’s primary form of outreach, so it may take it kind of personally that someone is mocking him for it, or he would if he bothered reading anything. For everyone else though, the book will be available later this summer.

Sh*t My President Says: The Illustrated Tweets of Donald J. Trump by Shannon Wheeler will be available in August, but you can pre-order it here.