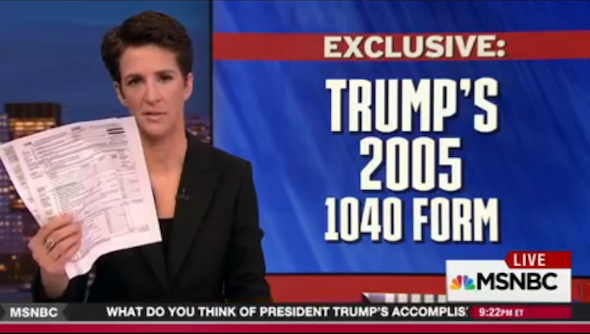 It really is hard to pair down every scandal thus far in the two-month old presidency of Donald Trump to just one that can be named the overall biggest scandal, but if you could, his taxes would have to make the Top 3. Not since Richard M. Nixon has a presidential candidate and victor hoarded magpie-like the completed taxation information they’ve sent to the Internal Revenue Service. That’s why when Rachel Maddow announced Tuesday evening that she had his taxes, there was significant interest. Too bad most of the wags couldn’t see the forest for the trees.

If you’ve ever watched Maddow’s eponymous nightly show on MSNBC then you know that she likes to tee up her main story. She likes to offer the historical and political context of the information she’s giving her audience, and sometimes that context eats up the first 10, 15 or even 20 minutes of her show. Fans of Maddow know that’s how she rolls, and while one might occasionally feel anxious about wanting Maddow to get to the point, especially when she’s got something good, we accept and appreciate her due diligence.

Others, perhaps tuning into Maddow’s show for the first time Tuesday, not so respectfully disagreed.

It disappointed me greatly to watch my Twitter feed fill up with other journalists, mostly male, spewing some variation of, “Shut up and tell us what you have, stupid woman! Don’t you know how TV news works?!” Of course this is from an industry that gave Trump almost unlimited non-critical air time, think balance is a thing that can be achieved void of the facts, and have stopped the presses to try and normalize Trump every time he’s able to deliver a speech on prompter without throwing in some awful anecdote or one liner.

Making matters worse is that Maddow’s been doing good work on her show, ignoring the frequent tweet storms and surgically exploring the rotten undercarriage of the Trump machine, from concerning foreign connections among staffers to the dubious deals of the Trump Organization. It’s why, despite accusations from the President of desperation, Maddow’s been enjoying a surge in ratings, and that’s even before Tuesday’s exclusive. It’s probably why David Cay Johnston took his exclusive to the Maddow show in the first place.

Maddow also realized that she probably had a slamdunk that was sure to grab eyeballs, even from people that don’t normally watch her show, so she made sure to lay out the reasons why, despite anything that the White House says, seeing the President’s tax returns is important. And that’s where it all went wrong. As Maddow laid out her case, the White House press office actually found some level of competency and released the pages Maddow and Johnston had to get ahead of the crisis for once. When the Daily Beast posted the pages online before Maddow had finished her preamble, a number of smug pundents posted to Twitter some form of “See stupid, that’s how you break news.”

If this attitude leaves a bad taste, I think this tweet kind of sums up why.

Former Secretary of State Hillary Clinton lost a lot of style points in the 2016 campaign because she was a political nerd that understands that things are more complicated than they seem, and that comes from years of experience doing the job right. It’s laughable that anyone in mainstream journalism, particularly TV news, would feel like they’re in a position to tell anyone how to produce breaking news since the term’s been run into the ground by most outlets in both the U.S. and Canada. “Breaking news”, more often than not, now means “if you haven’t seen it, then it’s breaking to you.” even if the news in question broke hours before.

And TV news has become all about so-called “breaking news,” which is why Maddow’s reporting is refreshing. While CNN and others chase stories of inter-party rancour over the American Healthcare Act and the new budget proposal, Maddow has been following up with print reporters turning under rocks to find out more about Trump’s business interests.

Earlier this week, Maddow dedicated time to New Yorker and Newsweek reporting on the Trump International Hotel & Tower Baku, a project in Azerbaijan for which millions were spent, and all overseen by Ivanka Trump herself, but was never opened. Why? It could be that there was no where near a reasonable demand for a luxury hotel in Baku, or it could be because it was built in the Azerbaijanian equivalent of skid row miles from the local business district, or it could be because the whole thing was a money laundering scheme for Ziya Mammadov, one of Azerbaijan’s most notoriously corrupt oligarchs and the transportation minister, who was one of the projects funders.

Does it not speak ill of the President that this is the type of person he’s associated with in his business practices? And if this is what the press can find without seeing Trump’s full tax return, then what are those documents hiding? It turns out, at least in the discovered 2005 return, that he’s not hiding that he’s paid nothing in federal taxes. He paid $36.5 million in income tax in 2005, although $31 million of that was an “alternative minimum tax,” a taxation method to cut down on the excessive deductions that the ultra-wealthy like Donald Trump can make. Of course, he’s mentioned in the past that he’d like to cut the “alternative minimum tax,” so…

Regardless, the Maddow exclusive is not the end of the story. If anything, I think the press that berated Maddow for her reporting style were probably butt hurt, not from losing a scoop themselves, but for realizing that this is something that they’re going to have to stay on top of. I think when people heard Maddow tweet “We have Trump’s tax returns,” there was a sigh of relief because this was one story they could put to bed. Nope. It all still stinks and there’s no end in sight unless President Trump wants to do the right thing and give up those returns.

Except that Trump’s made it clear that despite his promises those returns will have to be dragged into the light of day kicking and screaming. It will take tough people like Maddow and others to do it, as they’ve shown fearlessness in the face of the new Trump administration that can’t be found in too high a quantity in much of the White House press room or the halls of Congress for that matter. Perhaps taking exception to Maddow and her style these people should go out and get their own scoops, but it’s far too easy to snip behind Twitter when there’s obviously so much at stake.