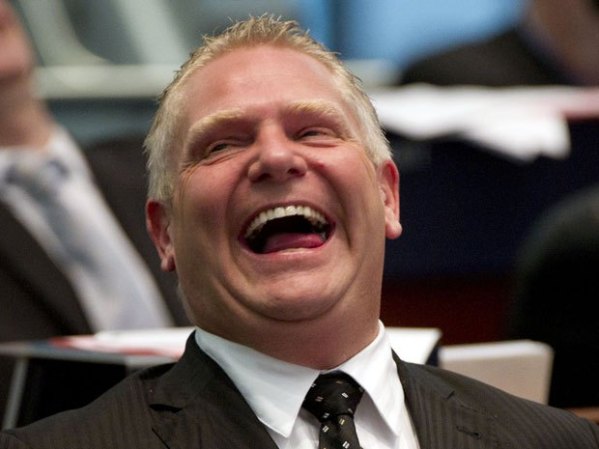 Here’s an idea: the next time Doug Ford says, “Come over to my house, I have something important to say,” the press should get more details first. Like last year’s “announcement” that he would *not* be seeking the leadership of Ontario’s Progressive Conservative party, Doug Ford’s annual special non-announcement was that he’s written a book. Or rather it was a joint effort. Apparently, Ford’s dear departed brother Rob spent a portion of his last days co-penning the definitive tome of his political career called Ford Nation: Two Brothers, One Vision – The True Story of the People’s Mayor. Doug calls it the truth. The Star’s Rosie DiManno called it “revenge porn.” I call it a sad attempt to stay relevant by the less-talented brother.

Dougie’s reveal Tuesday reminded me of another family where one brother clearly had the talent for his given field, the Jacksons. Michael Jackson passed away in 2009, and if a 2012 Daily Mail expose is to be believed, it only took a matter of hours for members of his family to start ransacking Jackson’s California estate and taking anything that wasn’t nailed down. There’s a long sad history of how Joe Jackson tried to parlay his son’s musical gifts into a bottomless ATM for his less talented children, but the posthumous spectacle of new albums, movies, tributes and other merchandise took Jackson family avarice to new levels disgusting greed. If Michael couldn’t be alive, he could at least continue to be the family bank card.

Of course money isn’t the Ford family’s problem, being likable is. Rob’s true gift was that in spite of everything, people liked him, which is not a quality that’s extended to his older brother, and there’s also the fact that Rob Ford spent years as city councillor building a base with his own two hands with every phone call returned and every hand shook. Now, here’s Doug, ready to collect on the memory of his brother and the ground game he accidentally developed. Are we surprised? No. Even Doug’s own eulogy for his brother was loaded with political subtext and text, including a moment where Doug humblebragged about Rob’s polling across party lines as a way to promote bipartisan unity.

If Doug had any human knowledge he’d know that at a funeral, no one’s political. Of course, this is a man who dragged his brother’s poor widow, a woman who was never much for the spotlight but exposed to it plenty by her late-husband’s misbehaviour, to his book launch. I’m sure she was eager to hear all about the book that’s “going to be calling out people, other politicians … that were drinking, were doing drugs, but they were untouched, they were unscathed. […] It’s going to rock the political world.”

Of course, the real reason to write a book with your more popular brother while he’s on his deathbed is to feed your own political ambitions. “I can assure you I will be running … politically,” Ford said as if someone thought that he might have meant track and field. It’s Campaigning 101, first you write a book, then you announce you’re running for office. Politically. What level of government Doug might be looking at is uncertain, his presser took shots at Mayor John Tory, and Premier Kathleen Wynne, but he saved his most vitriolic remarks for the current Prime Minister.

“Our new prime minister is running around taking pictures with Vogue rather than worrying about jobs and the finances of this country, running up billions of dollars of debt within this first few months,” said Ford who added that he’s more suited to be PM than Justin Trudeau. “He is unqualified to run any company, let alone the country.”

Let’s talk about running a company, because according to a Globe and Mail report from 2014, Doug isn’t very good at it himself. In fact, the picture painted by the Globe seems to indicate that Deco Labels and Tags succeeds in spite of the Fords and their ramshackle managerial style, and keep in mind that Doug intended to leave politics behind in order to get back to the suffering family business, at least until his brother fell ill and was unable to continue in his re-election campaign as mayor in September 2014. On top of being a one-term-and-done councillor, Ford had the third-worst attendance record; when it came to city council votes, Doug missed 53 per cent of them.

So what’s driving Doug Ford’s new political ambitions? In a word: Trump. Dismissive of critics, insulting to opposing politicians, media persecution complex, and a spotty business record backed up by grandiose assumptions of his own skills, Ford checks all the boxes. Many comparisons have been made between Donald Trump and Rob Ford, but its always worth remembering that Ford Nation was built on something more tangible than a four-word phrase (“Make America Great Again”). Rob Ford never met a policy book he couldn’t not read, but he built a solid reputation for great outreach to constituents. We often hear about how, as mayor, Rob was still returning constituents phone calls. I wonder, how may calls did Doug return as Ward 2 councillor?

But in the Trumpian tradition, Doug realizes you don’t need a record, or a policy position, to win. As Now Magazine pointed out, with appearances on the victory platforms of PC MPP Raymond Cho and his own nephew Michael in Ward 2 this past summer alone, Ford has “found a way to bask in the fun parts of politics without doing any of the work.” Not coincidentally that’s another charge against Trump, who reportedly offered Ohio Governor John Kasich a deal where he would be vice president and do all the work, while Trump focused on “making America great again.” That’s okay, as any of the other tell alls about the Ford Administration have noted, the Fords are just fine with others doing the work as they take the credit.

So in the midst of the ringmaster announcing that he’s getting ready to reopen the circus, it’s heartening to note that the grand announcement from Chez Ford was carried live by a total of one news station, and that’s CP24 whose focus is strictly Toronto. On the lunch hour news, Ford’s bow as an author was practically a blip, one of things you give 30-seconds to as the control room sets up the next big story. Doug Ford has written a book and he’s going to run for a political office again probably… That’s nice. A further reminder that when it comes to making news, some Fords are more equal than others.