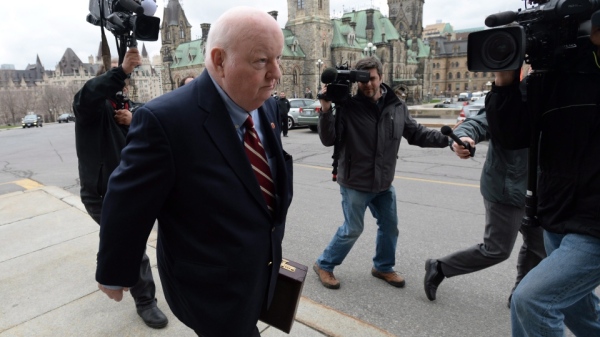 Sure, after two and a half years without a paycheque and what’s likely a tonne of legal bills, Senator Mike Duffy probably needs some dough. Of course, when the news hit this week that Duff Man was again filing his living expenses for reimbursement from the Senate (and the Canadian people), the immediate visceral reaction was, “Are you serious?!” And the answer was yes, even though it’s taken almost four years of his life, and almost the entirety of his political career, Duffy was back it, doing the very thing that got him into so much trouble in the first place: Claiming living expenses for being in the exact place he’s called home for over two decades.

As correctly pointed out in Kady O’Malley’s Ottawa Citizen blog, Duffy isn’t doing anything *criminally* wrong. They took him to court because of all his hands-in-the-cookie jar antics, from claiming to be a P.E.I. resident to paying out for “emergency” make-up, but he was found not guilty on nearly three dozen charges. Why? Because the rules that govern senate expensing didn’t specifically say getting a per diem for living in your own house is wrong. Fair enough, but here’s an interesting question: Is there no such thing as shame anymore?

Let’s put it this way, if I call you fat, it’s not against the law, but it’s definitely rude. Or how about this, if I borrow a book from the library for 30 days, and actually keep it for 60, and then return it and refuse to pay the fines, there’s no jail time in that, but I’m betraying a public trust, that I would return the book on time, and in the event I don’t, make restitution. That’s the point of – you know – society, we own up to our failings and faults, even when not commanded to by the courts. It also means that we understand what’s societally unacceptable, and endeavour not to do it again, not because there’s a chance we’ll go to jail, but because it’s the right thing to do.

So when it was revealed this week that Duffy couldn’t help himself and he said yes to collect that $78.80 per day living expense, we can intellectually agree that he wasn’t doing anything illegal, but many viscerally reacting stunned outrage. Wasn’t it enough that it was this kind of behaviour ate days, weeks, and years of airtime and column inches? Isn’t it enough that the actions of Duffy, Pamela Wallin, Mac Harb and Patrick Brazeau dragged their senate colleagues (in some case justifiably) through the mud? Isn’t it enough that the senate is still trying to rehabilitate it’s reputation and make a case for its relevancy while Duffy is handing in receipts again?

Granted, Duffy is looking to get a cheque for the paltry sum of $1,576, and we can admire his restraint that it didn’t ask for the full $1,700 kickback, but he’s got to know how this looks. The most stunning part of the senator’s reaction to all of this was just how oblivious he was to the outrage, especially considering that he was a journalist for decades. If Duffy were still a reporter, he’d be dining out on Duffy the Senator. He’d get up on his soapbox and talk about the hubris, and the lack of respect for either himself or the taxpaying citizens of Canada. You don’t accidentally run someone over in your car and avoid jail time only to get behind the wheel blindfolded the day after your acquittal, do you?

There’s no question that Duffy was scapegoated for political convenience. He was appointed by Stephen Harper, who promised Senate reform only to find the body marred in exactly the type of scandal that he had spent so much time and energy thundering against. In trying to make the scandal go away by paying back the expenses, then throwing his appointees to the sharks when that didn’t work, Harper made Duffy the symbol for all that was wrong in the senate, and it’s hard to say what Duffy will be best known for now: his long and illustrious journalism career, or the most salacious political court drama in the nation’s history.

So understandably Duffy may be in a spiteful mood. He alone of all this colleagues sat in court for weeks on end, and he alone came closer to going to jail for doing what it seemed like everyone else in the Senate was doing. In a sense, he became the face of senate corruption and dysfunction, and that may not be very fair, but feeling spiteful is one thing, and acting spiteful is another. It’s an immature response, and it doesn’t make Duffy look sympathetic. At best it makes him look petty, at worst it looks like he hasn’t learned his lesson, and that he’s decided to take his acquittal as a seal of approval. “The judge said it’s okay” is a compelling excuse, but not wholly accurate.

On top of all that, it makes Duffy look small and trifling. He is not a poor man, although his legal troubles almost certainly have made him poorer. Here is a man that was expensing things before his senate seat was confirmed, demanding more compensation from the party for fundraising efforts, fishing for a cabinet position and its perks, and handing in receipts for just about everything under the sun including paying someone to basically Google. It’s one thing to collect expenses for purchases made in the course of your work, but Duffy, for a while, seemed to take government service as a get rich quick scheme.

At the end of the day, the court decided that Duffy was not guilty, and that’s fine. He may be allowed to collect his living expenses, and that’s fine too. But there’s a higher standard he should be thinking about. For a while there, a majority of Canadians wanted to retire the senate and turn the Red Chamber into a ping-pong room, but a change in government and the promise of reform stayed the execution. Instead of gratitude for having a job, and being free, Duffy seems to not care about leading by example. A reasonable and truly regretful person would decline the reclaim of their $1,576, and instead hold themselves to a higher standard. “Upper Chamber,” after all, should be a state of mind as well as an actual position in the legislative pecking order.