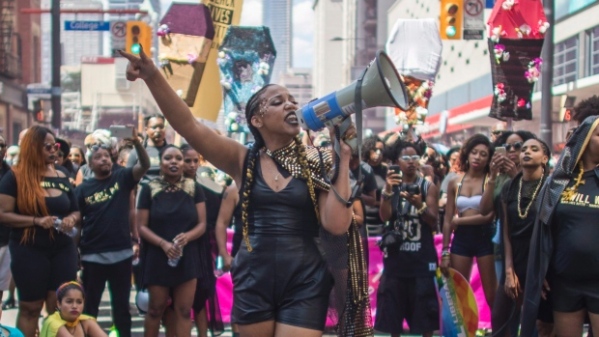 School might be out for summer, and so is Peter Mansbridge, but Open Sources Guelph keeps up its good works all year long and today will be no exception. Summer fun at Toronto Pride was interrupted for some seriousness as one group forced the annual event to get back to where it started from. Others, it seems, will have more time off than they bargained for, as a major crown corporation is looking to force its workers into accepting a new deal. And finally, we’ll talk to one of the few politicians that’s taking the time this summer to work harder… on his musical career.

This Thursday, July 7, at 5 pm, Scotty Hertz and Adam A. Donaldson will discuss:

1) Pride Goeth…? An otherwise charming and uproarious Toronto Pride parade got gobsmacked by its political past last weekend when Black Lives Matter – Toronto, the honoured group leading this year’s parade, held up the start of festivities till their demands were met. The episode quickly bifurcated Toronto’s activist community, there were those that admired BLM’s stand, and those that chastised them for turning an inclusive and celebratory affair into a publicity stunt for their own exclusive cause. So was it fair? Was BLM trying to shake-up things up by getting Pride back to its activist roots? Is their demand to have the Toronto Police removed from the parade reasonable, especially in the midst of the force making amends with Toronto’s queer community? And what happens next? Will Pride follow through on BLM’s demands, and are they bound to?

2) Freeze Mr. Postman. Although some would say it’s as antiquated as newspapers and video stores, many would argue that like those once great institutions, the post office still has its place, but are we willing to pay the price? That’s the question as Canada Post’s employees countdown to a lockout Friday that will see widespread mail disruption for Canadians coast to coast to coast as workers cry for more money and management just cries poverty. Although people don’t send letters quite as often as they used to, Canada Post’s parcel delivery is a backbone for many small businesses. On top of the current labour issues though, what about all those Liberal promises about reversing the cuts to Canada Post? Should we be trying to save the post office as is, or should be take this opportunity revamp the whole thing?

3) Sunny Jim. Not many city councillors have to take a break from their concert tour promoting their new album to talk politics, but such is the life of James Gordon. The Ward 2 councillor was elected to office in 2014 after two runs in provincial politics, which begs the question that after nearly two years on the job if the politics thing was all it’s cracked up to be? We’ll ask Gordon about that, and his efforts to increase community engagement, bring a little more social justice awareness to the horseshoe, and some of the big developments in his ward like the Homewood redevelopment. And with the release of his 14th solo album recently, we’ll also talk to Gordon about the intersection he’s created at the corner of music and politics.