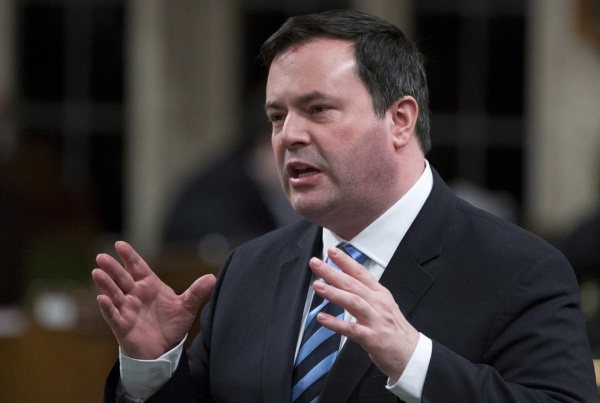 The left-leaning news site Press Progress has been breaking all kinds of stories, and this latest one is more than a little disturbing if you like your church and your state held separately. Jason Kenney, widely considered by many to be the frontrunner for the leadership of the Conservative Party of Canada, told a group of evangelicals near the end of the recent Federal campaign that our Charter rights come from God, and not the, you know, human beings of the government that passed them.

The below video is from a speech Kenney made before a group of evangelical Chinese business people in Richmond Hill in the waning days of the Federal election. In it, Kenney explains that “Canada is founded upon principles which recognize the supremacy of God and the rule of law,” and that the Charter of Rights and Freedoms were “created in the likeness and image of God … because if our rights are just given to us by a majority, or by the Parliament, or by the state, or by the judges, they can take those rights away.”

Technically, Kenney was sorta quoting the preamble to the Charter, “Whereas Canada is founded upon principles that recognize the supremacy of God and the rule of law,” but as Press Progress points out, the inclusion of God into the Charter preamble was a compromise by then-Progressive Conservative MP Jake Epp because he, like a lot of conservative politicians, was concerned that the Charter would be used to protect people’s rights on the grounds of sexual orientation.

He was right of course, because the Charter was used to uphold the rights of Canada’s LGBT people, and the mention of God in the Charter preamble did nothing to stop it. Why?

Lorne Sossin, dean of Osgoode Hall Law School, points out the language in the preamble is “all but ignored by the Supreme Court and by most constitutional observers” and is only meaningful as “a general statement regarding the universal, normative aspirations of the Charter,” which he interprets as broad “aspirations to moral good and social justice.”

Which brings us to Kenney, who apparently considers an opposing interpretation of the line due to his complex knowledge and understanding of the Constitution thanks to his background in the Alberta and Canadian Taxpayers Federation. If Kenney wants to take the word “God” as being literal, that’s fine, but let’s think before going down the same road as our counterparts in the United States, many of who also think God writes.

Former House Majority leader Tom Delay said in an interview last year that America started to lose its way when “we allowed our government to become a secular government,” and added “that God created this nation [and] that He wrote the Constitution, that it’s based on biblical principles.”

Presently, several of the Republican presidential nominees also believe in the divinity of the Constitution. Former Arkansas Governor Mike Huckabee has gone on record several times about the United States being a Christian country, while Texas Senator Ted Cruz takes his lead from his father Rafel who one said of the America’s founding documents, “they were written on the knees of the Framers.  The Framers were seeking divine revelation from God, that’s why the Declaration and the Constitution have lasted over 230 years because they were divine revelation from God.”

Are these are the people we want to be borrowing a line from? Especially in the wake of whole hog insanity currently being demonstrated by the American Right? Former Prime Minister Pierre Trudeau, under whose utterly non-divine direction the Constitution Act of 1982 was written, said that he found it “strange” that “some politicians felt obliged to mention God in a constitution which is, after all, a secular and not a spiritual document.”

Perhaps Kenney is attributing to God because the real author of the Constitution, including the Charter, was the Government of Canada under Trudeau the Elder. But Jason Kenney can believe what he wants, and if he wants to be a politician in Canada, he can’t start attributing our Constitution to an intangible and unproven force. Indeed, the Charter was given to us by a “majority” of the “government,” and has been, and remains, upheld by “judges.”

It seems like a minor thing, and you can maybe even say that Kenney was playing up religion to an audience of potential supporters, but there’s an incipient danger in seeing a powerful member of the former government start to tie government standards to divine initiative. If something is divine, it is meant to be perfect and unchanging, but any person with a marginal interest or knowledge of the law knows that these documents are meant to change and evolve over time. We already know that many in the religious community don’t believe in one evolution, how long till they don’t believe in another?