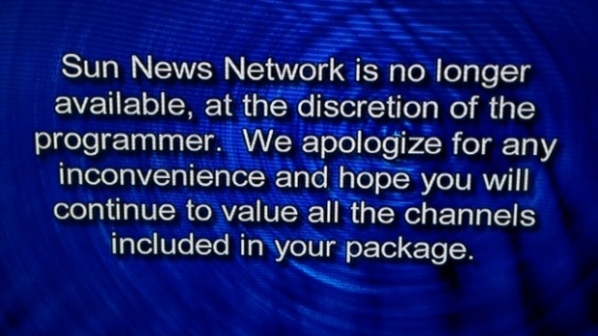 The untimely demise of Sun News Network Friday left about 200 media professionals out of work, which is sad considering the current sorry state of the media business. Still, if Sun News is looking for someone to blame for their fortunes, then they need only to look in a mirror. True, the lack on any desire on the part of the Canadian Radio-television and Telecommunication Commission (CRTC) to make Sun News mandatory for national cable boxes might have had something to do with it too, but for the most part, here are the 10 reasons why Sun News bombed.

10) “Fox News North” – Even before Sun News hit the air, the troops were already rallying against it. The activist group Avaaz.org  gathered some 21,000 signatures for a petition to stop Quebecor from gaining a Category 1 approval for the eventual Sun News Network. Category 1 would have meant mandatory carriage, but the CRTC wasn’t accepting new applications for Category 1 at the time. When Quebecor re-applied for Category 2, a petition with 30,000 signatures was gathered with signatories including Margaret Atwood. The concern, according to those petitions, was that Sun News would “push American-style hate media onto [Canadian] airwaves,” and the title of the petition was “Stop Fox News North.” Although the application eventually succeeded, the name stuck.

9) Obsession with the CBC – Right-wing media is always perpetuating the myth that there’s a liberal bias in the mainstream media, and seeing as how the CBC is a crown corporation, it provided an irresistible target for Sun News and their glorification of the free market that ultimately betrayed them. Quebecor filed several Access to Information requests for details of how the CBC spends its $1.1 billion budget. Brian Lilly would later mock CBC presenters for their pronunciations of French names, which would later force what became a regular Sun News segment: the apology. Sun News was so eager to lambast the CBC that they put a comedian posing as a right-wing commentator a la Stephen Colbert to attack what they call “The State Broadcaster,” only to withdraw it once they realized he wasn’t a “pundit.” It may have seemed like Sun News had a vendetta, but Quebecor CEO Pierre-Karl Péladeau himself pointed out that the CBC seemed to not spend as much money advertising through them as other media outfits. So in the end was it all about spite? I think we know the answer.

8) They Named Sona’s Name – When the Robocall scandal broke out early in 2012, a name for the responsible party quickly rose to the surface, and that name was Michael Sona. The person that broke it, Sun News host Brian Lilly. Where Lilly got the name, he hasn’t said, but when he broke the news it didn’t take too long for the government to pile on and for the narrative to become established, and as a result Sona became the only person convicted of the affair. Lilly never revealed who his source “inside the Conservative Party” was that fingered Sona, but in an October 2012 blog post, Lilly put the blame for that squarely on Sona, for not coming on to Sun News in the first place to respond to their allegations. Meanwhile, some would argue that not going on Sun News was the first smart decision Sona made on the matter.

7) Hardball with Ballerinas – In June 2011, Sun News showed off some of that straight talk when host Krista Erickson turned an interview with dancer Margie Gillis into a skreed about government funding for the arts. Erickson demanded to know why taxpayers should be funding dance and other arts programs when soldiers were dying in Afghanistan, and often shouted over Gillis when she tried to answer Erickson preposterous line of questioning. The Canadian Broadcast Standards Council received over 6,500 complaints about the affair, and although the council did eventually rule in Sun News’ favour, it didn’t so much establish Sun News as a provocateur of controversial opinion as it did as a place that employs people that scream at ballerinas.

6) “The Kiss of Death?” – In one of the most unusual episodes featuring Sun News host Ezra Levant – and that’s saying something – involved Liberal leader Justin Trudeau and what was otherwise a cute little moment for a newlywed couple of got their picture with Trudeau while he was passing near where the wedding party was taking their photos. Not only did Levant chastise Trudeau for having “invaded” the bride’s “personal, intimate day,” but he called Trudeau’s father, former Prime Minister Pierre Trudeau, a “slut,” and the elder Trudeau and his ex-wife Margaret, “promiscuous.” Sun News apologized after Trudeau said he would no longer grant access to any Sun chain media outlet, but Levant himself never apologized on air, or in print. His show, The Source, despite numerous controversies involving Levant, remained on the air until last week, going down with the ship (as it were).

5) It Looked Cheap. – As you’ll read in a minute, there wasn’t a whole lot of money for Sun News to throw around, which undoubtedly added to the on-air appearance that Sun News was a cheap venture. Given the cashflow issues, one might be free to excuse the fact that Sun News looked like it was staged by a high school media class, and not being able to write a big enough cheque cost them in the personnel department too. Sun News had some talent, hosts like David Akin and Alex Pierson are experienced and accomplished journalists, but by and large the network on whole depended on reporters and columnists for the Sun papers, who I’m sure are very good in writing, but that doesn’t necessarily make them effective as on-air personalities.

4) Ford Nation: One and Done – It hit the air shortly after the one-two punch of Rob Ford finally copping to his crack cocaine use and making inadvertent, explicit reference to his sex life on live TV, a TV show dedicated to and by the Ford Nation, and its originators Rob and Doug. Although it was supposed to be an ongoing series, and even though it set record ratings for Sun News, the show was cancelled the day after its first and only showing on November 18, 2013. Why? Part of it was logistical, the Fords while good live and on the stump on Newstalk 1010, they couldn’t navigate the pre-tapped nature of programming on Sun News, and part of it was business with several companies refusing to advertise during Ford Nation. So even though Ford Nation got about 200 per cent more ratings than the average Monday night programming, it had to go, and it became an example of how Sun News can’t even get a slam dunk right.

3) Yay, Racism!  – During his show in September 2012, Sun News commentator Ezra Levant said of the Roma that they were “a culture synonymous with swindlers. […] Gypsies are not a race. They’re a shiftless group of hobos. They rob people blind. Their chief economy is theft and begging. For centuries these roving highway gangs have mocked the law and robbed their way across Europe.” For that, the Canadian Association of Broadcasters’ Code of Ethics and Equitable Portrayal Code declared Levant’s comments “abusive and unduly discriminatory against an ethnic group, and violated other provisions of the regarding negative portrayal, stereotyping, stigmatization and degradation.” As a result of the outcry, the people of Canada got a rare Levant apology. Twice.

2) A Money Losing Venture from Day 1 – You can’t have a TV network with an average of 5,000 viewers and expect to make money. To wit, Sun News was bleeding money from its first year, and dragged down the rest of the Quebecor publication empire with it. For every dollar that the network made, it lost 13 more with a combined loss of $14.8 million in 2013. That was bad news, but it was better news than 2012 where $17 million was the amount of money that Sun News lost. But eight figure losses every year, over three years, are going to catch up with you eventually.

1) “Fake News North” – Pundits and wags often nickname Fox News as “Fraud News,” “Faux News,” and “Fake News,” but rarely is that taken literally, but Sun News, with Fox as its model, crossed that line in October 2011 when they went beyond reporting the news to making it. A citizenship ceremony, reportedly put together by the Immigration Ministry, including six people who were not “new Canadians” but were rather ministry employees. When the news broke and the lie was revealed, Sun News and Immigration Minister Jason Kenney blamed each other for the screw up, but in the end, what was supposed to be a simple media event turned into a controversy and a test case for ethics in journalism.