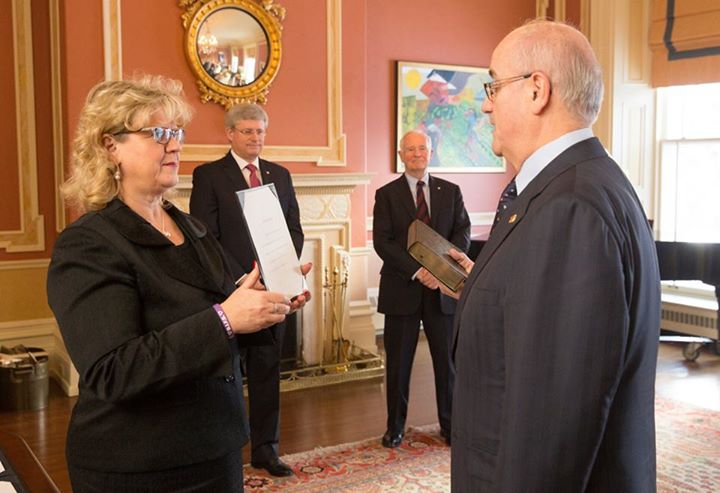 In a surprise New Year’s announcement, embattled Veterans Affairs Minister Julian Fantino found himself demoted to associate minister for National Defence while Durham MP Erin O’Toole will try to salvage Fantino’s old post as the Federal government aims to get itself on its best footing for an election year. A quick ceremony at Rideau Hall this morning installed O’Toole as Fantino’s successor, while the much embattled MP of Vaughan returns to a post he held shortly after his first election in 2010, as Prime Minister Stephen Harper tries to correct mistakes made with the Veterans Affairs portfolio last year.

The PM tried to downplay the maneuver in a brief press release. “Our Government remains focused on the priorities of Canadians: jobs, the economy, safe communities, and standing up for Canadian values at home and abroad,” Harper said. “With this in mind, Mr. Fantino and Mr. O’Toole have been asked to draw on their considerable knowledge and experience to take on important portfolios. I am confident that they will deliver results and provide strong leadership as they go about addressing their duties and responsibilities.”

The shuffle follows several weeks of demands by the opposition to have Fantino removed as Veterans Affairs Minister. A year of bad photo ops including finger pointing at a World War II vet, and ignoring a veteran’s widow were compounded last fall by news that over $1 billion in budget funds for Veterans Affairs were returned to the treasury, while the announcement of new funds to help veterans was bungled with a roll out that promised a six year plan, but was really more of a 35 year plan.

Fantino himself was short with reporters outside Rideau Hall today, merely giving them a curt “Happy New Year,” but on his Facebook page, Fantino posted a lengthy statement about his sudden switch in ministerial responsibilities.

“I will remain forever grateful to the countless veterans I had the distinct honour of meeting in all regions of Canada, and while abroad visiting the cemeteries of those brave men and women who died in service to their country,” he wrote. “Each and every day that I served at Veteran Affairs I was guided by a firm belief that Government must stand-by those who have served and continue to serve.

“Under Prime Minister Harper, I can say with confidence that we have fully embraced that principle,” he added. “I am proud of the critical improvements we have delivered for Canadian Veterans and their families.”

As for the new man at the head of Veterans Affairs, Erin O’Toole, it’s not the first time he’s been brought in to clean up after a controversial minister. O’Toole was elected to Parliament in 2012, taking over the riding vacated by Bev Oda, she of the $16 orange juice. O’Toole looks good for the part on paper as a graduate of the Royal Military College of Canada, and a 12-year veteran of the Canadian Armed Forces. He’s been more or less rehearsing for the role the last couple of months, speaking on behalf of the government on veterans affairs in the media.

“I am humbled by this opportunity to serve our veterans and appreciate the Prime Minister’s confidence in me,” said O’Toole in a statement. “From the age of 18 when I joined the military out of high school up until today, the men and women of the Canadian Forces, their families, and our veterans, have always been a very important part of my life.”

MPs return to Parliament Hill for the start of the winter session on January 26.