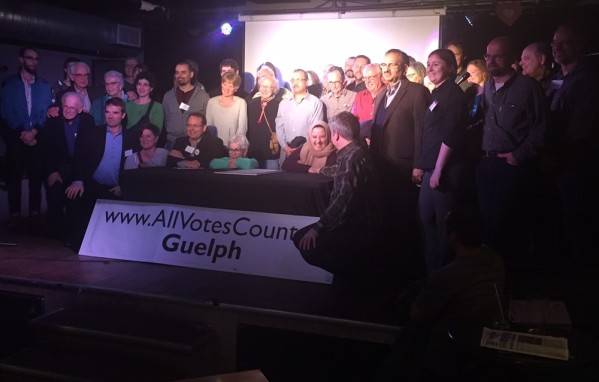 News coming out of the U.S. this week is too heavy, so we’re going to focus on some lighter topics on this week’s Open Sources Guelph: cultural appropriation, poverty, and electoral reform. We jest, of course, these are all very heavy topics in our own right, and we will aim to address some very key questions. Is it alright for white male writers to mock the idea of encouraging aboriginal people to tell their own stories? Is it weird that we seem to keep overlooking issues of poverty and loss in our community? And how are local activists trying to encourage the government to keep its promises?

This Thursday, May 11, at 5 pm, Scotty Hertz and Adam A. Donaldson will discuss:

1) Appropriations Fill. I am not the Walrus, Jonathan Kay had to admit when he stepped down as the Editor-in-Chief of the “general interest” magazine last weekend. Kay was a casualty of an online uproar over a Writers’ Union of Canada’s magazine article that discussed having an “Appropriation Prize” for the “best book by an author who writes about people who aren’t even remotely like her or him.” After the article’s writer, Hal Niedzviecki, was forced to resign for it, Kay came to his defense in the National Post, when 24 hours later, he himself was forced to resign from his job. So what’s the take away from all this drama? Were Kay and Niedziecki martyrs for free speech, or are they two white guys that don’t get it?

2) Struck a Nerve. A column co-host Adam A. Donaldson wrote for GuelphToday.com seemed to get some unexpected and widely-shared attention last week. The topic was about Guelph’s underclass, the poor, the sick, the addicted, the disenfranchised, and how we constantly seem to be praising our own achievements in the Royal City as being a livable and enjoyable place to be, while there is a wide cross-section of our fellow citizens who are not having such a great time. We’ll talk about why poverty and these related issues are under-reported, how we can raise awareness, and what role the media might play in highlighting the needs and issues of people in our community that so desperately need the help.

3) Democracy (Guelph) Now. When Justin Trudeau promised to reform Canada’s electoral system during the 2015 election, he got a lot of people in Guelph excited, and when he reneged on that promise earlier this year, he conversely made a lot of people in Guelph mad. A non-partisan group called Democracy Guelph has birthed out of that irritation, and they have a plan they think will allow the government to put electoral reform back on track. But will it work? We will be joined his week by Steve Dyck and Anne Gajerski-Cauley, two members of Democracy Guelph, to get an update on their efforts and and how they’re feeling about their chances to put E.R. back on the priorities list heading into a key vote in the House of Commons on the special parliamentary committee report.