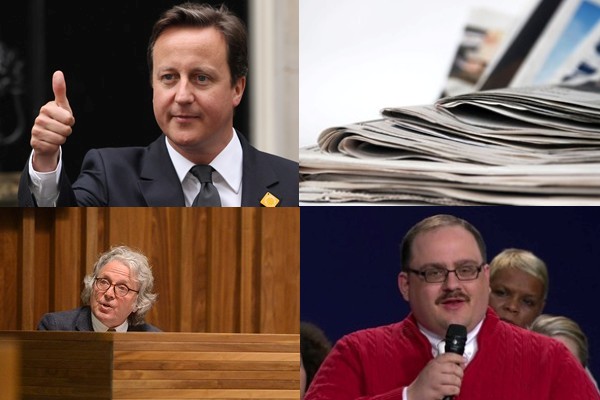 By the time this article posts, our annual year end awards show will be over. In case you missed it, or you want to save the results for posterity, here’s the breakdown of how the Open Sources Guelph team saw the year that was…

Worst Politician of the Year: David Cameron. When your cynical political calculation to win an election ends up turning around and biting you, and the country, in the butt, the only accolade you deserve is to be named the year’s worst politician. Blame Brext all you want on the global wave of populism, or the spread of disinformation on the “Leave” side, or economic pressures or whatever, but the real architect of this disaster was Cameron, who secured his 2015 election victory by promising a referendum on U.K. membership in the E.U. to the hard right ideologues in his own party. The result of Brexit was a very uncertain future for his country, but Cameron, like so many of the other people behind the disaster, decided to abandon ship rather than deal with the fallout of the mess they created.

Best News Story of the Year: Media Renaissance. A couple of weeks ago, Donald Trump unleashed a Twitter tirade on Vanity Fair for a less than flattering review of this new restaurant Trump Grill (or Grille). The “failing” Vanity Fair then saw a ten-fold increase in the number of subscribers, an action that’s been repeated frequently following the November 8 election of Trump as people have been speaking with their wallets, and giving money to the press organizations that will hold the new president, and his less than congeal relationship with the truth, to account in the new year. Here in Canada, the Federal Liberals gave $400 million to the CBC and are exploring the option of making it ad free, while crowd-funded news sites are gaining steam in both support and popularity. The optimistic view is that we’ve reached a critical turning point, and that the public now understands the true cost of having a free press. On the other hand, there’s now the looming spectre of “fake news”…

Lifetime Achievement: Donald Trump. The inaugural lifetime achievement award goes to a man that transcends all categories. Sure the U.S. Presidential race was a trainwreck, but you could hardly call Donald Trump the worst politician – He won! – and you can’t really call him the best because he seemed to win in spite of a whole lotta self-sabotage, and losing the popular vote by nearly 3 million ballots. Good news? What good news? Trump, after raging against the machine, and pay-for-play, and all the things that people supposedly hated “Crooked” Hillary for, has decided that those things aren’t so bad after all in putting together his administration. There’s no possible way things can get weirder, so we’ll just shut the door on Trump once and for all and retire his jersey up in the rafters of CFRU.

Trainwreck of the Year: Ken Bone. Everybody saw Ken Bone in his now signature red sweater, but the person sitting next to him at the second presidential debate should have had a shirt on that said, “I’m with stupid.” For some inexplicable reason, Bone became an American folk hero of sorts – for 15 minutes anyway – for being one of a number of undecided voters and articulating a rather simple question about energy policy. Not only was it later revealed that he works in coal, but he walked away from that second debate still undecided, and this was 48 hours after that infamous Access Hollywood tape was released. The next night on the Jimmy Kimmel, Bone told the host that he was leaning toward Trump because his policies  “more align with my economic interests”, but he thought it would be “unconscionable” that same-sex marriage rights might be “taken away by a Supreme Court justice appointed by Donald Trump.” So there you have it! The most reasonable man was caught between his own selfish economic interest and not wanting to see others lose their long fought for rights. The Socrates of our time, he is not!

Best Politician of the Year: James Gordon. It’s nice to name someone local for this title, but in this case it’s also well deserved. This past summer, as hundreds of people looked for leadership on the water-taking issue, and with the provincial government – under whose supervision water-taking is overseen – seemingly abdicating responsibility, Gordon put water on the front burner. By bringing a motion on the matter to council, Gordon gave advocates and those concerned about the issue, somewhere to direct their energies, and, in no small way, opened the floor to a province-wide debate on water-taking, the government’s rights, and the industry’s responsibility to ensure safe, secure and sustainable water resources. The City of Guelph can’t really do anything on the matter, and the offending plant isn’t even within our city limits, but in the middle of a very dry year, as a community was calling for action, one man on city council answered the call, and he should be commended.

Word to Retire this Year: “Taxpayer”.  When we start talking about “Taxpayer money” in relation to an accused murder being allowed to access the public defender’s office, you’ve got to stop and wonder whether we’ve gone too far. Since the banner days of Ford Nation, the term “taxpayer” has been used as a dog whistle with increasing frequency. Some want to use it to signify a special class of citizens, the makers as opposed to the takers to put it another way, but the truth of the matter is we all pay into the system, even if it’s just a little. That’s beside the point because modern taxation is supposed to be about creating a public good, combining the resources of *all* citizens to create a better society, and sometimes that means making sure an accused criminal gets a fair trial.