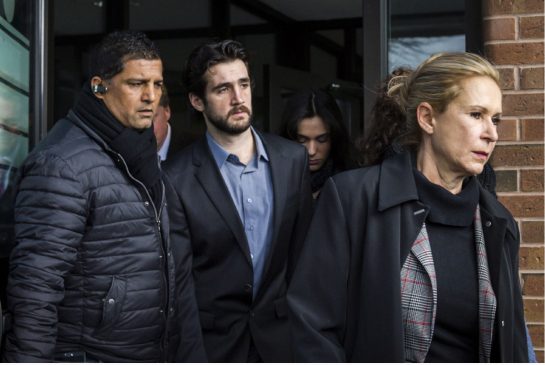 Most fast food places have drive-thrus, a convenience invented for the purpose of allowing consumers to pick up food quickly and smoothly and take it elsewhere to be consumed, perhaps with family. Still, take a walk past a restaurant with a drive-thru and look at the parking lot, and you will see people, eating in their cars, after picking up their food. Why eat your meal crammed behind the dashboard of your car instead of eating it at a table or a booth inside the restaurant? It’s part of, what I think, is a dangerous fetishization of our cars. Automobiles are no longer a convenience, they are an extension of self that people feel they’re entitled to.

Marco Muzzo was enjoying a bachelor party weekend away late last September. He and his friends had a very good time with an epic pub crawl to various bars and hotels south of the border, it had all been chronicled on social media in various photos and videos, but the time had come to return to Canada. Landing at a private air strip onboard his private jet, the still drunk Muzzo got into his high end SUV and starting driving home, but along the way he crashed headlong into the Neville-Lake family at a Vaughan intersection. Three children under 10 and their grandfather were killed.

Here was a man who had everything. Muzzo had the money to call a cab, request a car and driver, or even just get picked up at the sir strip by a friend or family member. He had already been charged once before with speeding, a warning that perhaps he was taking his ability to drive and his vehicle for granted. To me, the most problematic part of Muzzo’s sentence, which was handed down this week in a New Market court, was not the 10 years in prison, it was that Muzzo would be able to get his license back in 12 years. Now no one’s saying that Muzzo’s actions were malicious, that he purposefully got into his car and thought “I want to find a nice family to kill,” but haven’t his actions proved that he doesn’t take car ownership, or its responsibilities, seriously?

According to the Preliminary 2013 Ontario Road Safety Annual Report, the most recent year available for statistics, as many as 119 people were killed in drunk driving accidents, with another 65 killed in speed-related collisions. There were a total of 91 pedestrian fatalities in 2013, and another 17 among bicyclists. Another 6,700 more pedestrians and bicyclists were injured in some way along the spectrum of minor to major, and there are no numbers available to list all the near misses those two groups experience in a given year. Ask anyone you know that walks or bikes often, and they will have horror stories about “that time…”

A survey done by the American Automotive Association showed eight out of 10 drivers  rank aggressive driving as a “serious” or “extremely serious” concern. Remember that 80 per cent number, because in 2012 roughly the same amount of people in a Kanetix poll said that they were guilty of “road rage-like” behaviours. It shows an indelible amount of self-awareness on the road, we’re aware of the danger, we see it in ourselves, but hundreds of people still die every year in traffic accidents caused by drinking, speeding, or a general lack of awareness of the driver’s surroundings. A car is a brilliant way to get around, but it’s also a dangerous weapon when used without regard for its power.

So why does this happen? Next time you get in your car, look around. Is it clean? Well-kept? Or are there clothes, belongings and fast food wrappers everywhere? I know, I know, you have a busy life with a lot of places to go and things to do, but there was once a time when “living out of your car” was seen as a negative, and not a badge of honour. Our cars are no longer tools, or conveyances to get us from point A to point B to point C, they are our secondary dwellings. That’s part of the reason why people struggle to give up their personal cars and take transit. Sure, part of it is timing and convenience, but part of it also has to do with that part of our brains that attaches the greater value to detached homes with big yards that apartment buildings and townhouses: status.

In other news this week, the province announced funding to construct a bypass at the 401 near Morriston to ease traffic demands in the area. The move was welcomed by the community who for years have been raising alarm bells about the speeding through their small town, and have tried various traffic calming measures over the years, including increased fines, to get people to take the lead foot off the pedal along Highway 6. While the bypass is surely need, if only to support the volume of traffic between Guelph and Hamilton, it seems again like a concession that we’re incapable of making people abide by the rules so we change the rules to accommodate them. Meanwhile, if you want to take public transit between Guelph and Hamilton you have to detour through Milton, Mississauga and Burlington.

As for Muzzo, no punishment will ever be enough, not that the point of the legal system is to punish. From his comments and actions in court, it does seem that he is genuine in his grief and regret, and though understandably the Neville-Lake can’t accept that, nor could they even hear it, the courts do show mercy for those that accept the responsibility for their actions; Muzzo entered a guilty plea, and will not appeal his sentence. Mercy is the mark of a fair and wise society, but there’s also such a thing as prudence, and proportionality. In other words, what does a person have to do to get their car taken away forever?

You see, there’s no Charter provision for having the right to an automobile, but you’d think there was one. Framing the effort to promote transit and reduce congestion by raising gas taxes or creating High Occupancy Vehicle (HOV) lanes is framed as a “War on the Cars,” implying that we take an affront to our ability to drive more seriously than, say, our Access to Information, which is dismal, or our rapidly declining free press, which is getting smaller all the time. The issue is bigger than Muzzo, or Morriston, and one not easily resolved. For years I’ve been trying to find out from transit advocates how we can get more people out of their cars, and no two answers are exactly the same. But maybe it comes down to this: we all mistakenly have to come the conclusion that driving is a right, not a privilege.