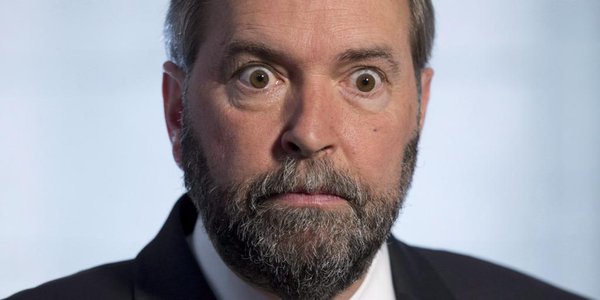 Losing is never easy; ask Stephen Harper. Actually, you can’t ask Stephen Harper because he’s been engaged in a Kafkaesque maneuver of crawling along the floor boards of Parliament Hill and the Capital area in an effort to avoid pictures of him not being Prime Minister from being taken. But if there’s one thing Harper has done well since October 19, it’s accept the loss. He lost the election, conceded defeat, and as difficult as it may be, he’s moving on with his life. Perhaps, Tom Mulcair should take note.

Yesterday in Vancouver at the B.C. NDP’s annual convention, Mulcair talked like a man still campaigning. “This has been a campaign that, as you know, has had lots of ups and downs. But boy, here in British Columbia it’s been mostly ups,” he told to the cheering crowd. “I am so honoured to have led this party through this federal election and so humbled in front of the effort that was deployed here in British Columbia. All we have to do is make sure that in 2019 everybody understands that the Orange Wave starts in the Pacific and works its way east.”

Sub “British Columbia” for “Quebec” and “east” for “west” and this is more or less the same speech he was giving a month ago. While it’s true, the NDP had its best showing ever on the left coast, winning 14 of 42 seats, and while it’s also true that they had their second-best showing ever with 44 total seats won, that’s small potatoes coming down from 103 seats, Official Opposition status, and being the presumptive government-in-waiting. Mulcair, I don’t think, is taking it well.

“I think the NDP formed the only real opposition Mr. Harper ever had to face and that’s one of the reasons we were able to defeat him,” Mulcair said to the press after his first caucus meeting post-election Wednesday. Note too that this was the same day that Prime Minister Justin Trudeau and his cabinet was sworn in at Rideau Hall, and roughly concurrent with their first meeting.

Mulcair then went full-Trump saying that the NDP was the “best Official Opposition Ottawa has ever seen,” and added, “We had set as our number one priority to make sure this was an end to Stephen Harper’s Conservatives, and you know what? Check that box. Mission accomplished.”

It sort of reminds you of when Americans take credit for winning World War II, yeah, they did their part, but it really was a team effort and if Britain hadn’t stood alone for nearly a year against the full German onslaught till Russia and the U.S. were forced to get into the fray… Who knows? In 2015, despite Trudeau and the Liberals winning popular support across all regions, not to mention a clear and substantial majority of seats, it is to Tom Mulcair and the NDP that goes the credit. At least according to Tom Mulcair.

Now none of that is to take away Mulcair’s contributions in the last Parliament. His daily, prosecutorial questioning of the Harper government was something to be admired, and encouraged, as the very best example of our adversarial system and the demands of accountability to government authority, but let’s not pretend the result of October 19 was a team effort. Indeed, Mulcair aimed his guns at Trudeau as often as he had them aimed at Harper, and his dismissive and sometimes condescending tone to the Liberal leader did him no favours in debate appearances. Like Team Harper, Mulcair underestimated Trudeau, and by the time Mulcair realized he was up against a formidable opponent, the tide was turning.

Pundits will be unpacking what went wrong with the NDP campaign in 2015 for years, but popular opinion right now says that their failure to capitalize on 2011 gains comes down to their principled stand on the niqab, and the pledge to balance the budget at all costs. But the niqab debate doesn’t explain Liberal gains in Quebec, and the balanced budget stance was a hint of a larger problem. Basically, like the Ontario NDP in 2014, the party went too far right (for them). Coming off of the leadership of the more grassroots, cosmopolitan, and more-personable Jack Layton, selecting the buttoned-up, career politician and former Quebec cabinet minister was a compromise. He was the acceptable face of a Prime Minister leading a populist party.

For a while it looked like the strategy would work, Mulcair’s sharp attacks on the government in Question Period endeared himself to the majority of the country that didn’t like Conservative policies, or its member’s canned answers and talking points. But campaigning is a different beast, and by the time the leaders were hitting the campaign trail it had been months since the last Question Period, and there were no daily reminders as to why people liked Mulcair in the first place.

As the campaign went on, Mulcair’s strategy became even more bizarre. He kept quoting the erroneous “35 seats” number, and be began evoking Jack Layton’s name while simultaneously attacking the Liberals, like how he was there with Jack Layton when the Liberals walked away from the coalition agreement in 2008. It almost made it sound like Mulcair was Layton’s co-leader and heir apparent. Apparently, fighting those six other people for NDP leadership in 2012 was all a formality, probably much to their dismay.

Of course, now the narrative is different. The NDP weren’t defeated in 2015, the orange wave was just deferred, and if Mulcair can take credit as Trudeau’s puppet master in the mean time, why not? And do the NDP have any choice but to stick it out with Mulcair, especially since stalwarts like Peggy Nash and Paul Dewar, potential and obvious successors to the federal leadership, went down in defeat? Probably not. At the same time though, self-delusion is not going to help Mulcair or the NDP any in the months and years to come.

In the case of Campaign 2015, Canada just wasn’t buying what Mulcair was selling, and only artists and inventors of gadgets get to argue the point that their failure was tied to timing. A political party must occasionally bend to political reality, and the reality here is that sometimes life doesn’t go the way you want. The mark of true character is when you use failure as a learning tool, accepting what you did wrong so that next time you can do it right. The NDP has never been charged with being a party without character, and now is their chance to show it once again.