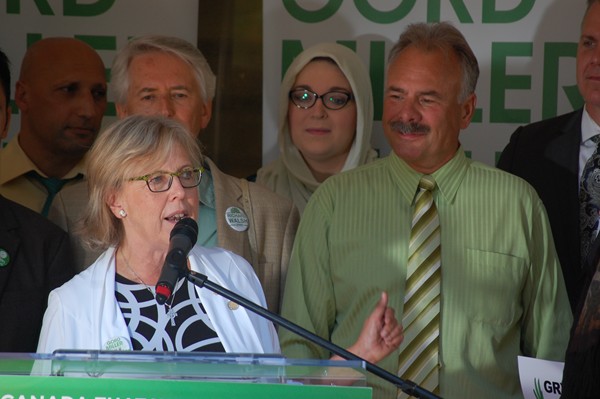 Green Party of Canada leader Elizabeth May was at the University of Guelph this morning to announce her party’s platform for post-secondary education and addressing youth unemployment, but being the eve of a debate, the media was interested in knowing more about May’s plans, participating via remote on Twitter. The Globe & Mail and Google, who organized tomorrow’s debate on the economy in Calgary, wanted a “steamlined” debate with just Stephen Harper, Thomas Mulcair and Justin Trudeau, but May is still holding out for hope that she can still play ball with the other leaders in a televised debate, and she dared NDP leader Mulcair to make it happen.

“The Globe & Mail, I think, is doing a favour for the Conservatives,” May said Wednesday morning. “What we’ve got is the Globe & Mail, Monk debate and TVA that has excluded the Green Party.”

The consortium of broadcasters – CBC, CTV, and Global – typically team up to broadcast two debates, one English and one French, during a Federal election campaign. But earlier this year, it was announced that Stephen Harper would not be participating in those debates under any circumstances. Mulcair has said that he will not participate in any debate that Harper is not a part of, so even though the consortium debate remains scheduled for October 8, only Trudeau and May have RSVPed.

“Everyone should know that unless either Stephen Harper or Tom Mulcair change their minds very quickly, the national televised leaders debate will be cancelled,” May said. “Over 10 million people used those debates as a way to make up their mind as to how they’re going to cast their vote.”

“I asked Tom Mulcair ‘Does he really want to create political cover for the Conservatives?'” May added. “Show up, [and] call Harper’s bluff. He’ll show up to the nationally televised leaders debate as long as Tom Muulcair, Justin Trudeau and I are standing by our podiums. Stephen Harper will not leave an empty podium for the Conservative Party on October 8. So step up, show up, call his bluff and insure Canadian voters have access to the nationally televised leaders debate.”