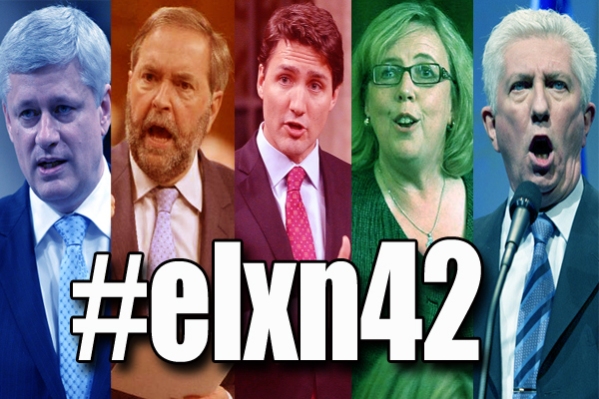 It was the night before the election call; and all through the house; the parties were warring; and ready to pounce. With Stephen Harper widely expected to visit the Governor-General in the next couple of days to request the dissolution of Parliament, thus starting the official campaign. But on this election eve, the main federal parties are doing all they can to align their forces for what might be the longest, hardest and bloodiest campaign in Canadian political history.

While the Conservative members were out in force to promote the success of the tenure in office, the left-leaning website Press Progress posted a composite of videos created for 13 Conservative MPs, amongst them Kitchener-Centre MP Stephen Woodworth, where they seem to be reading from the same script. Obviously, Press Progress wants to revisit the theme of Conservative candidates being robots for the message coming out of central command in Ottawa, and that message definitely connects when you see all the candidates stacked one on top of the other.

Meanwhile, Justin Trudeau finally responded back to that odious “The Interview” ad from the Conservatives with an upbeat, confident message featuring himself on a sunny Ottawa day talking about what he’s really not ready for (Hint: it’s not himself as Prime Minister. He’s ready for that). The new spot was posted to the Liberal You Tube page.

Speaking of “The Interview” team, they’re apparently coming back with a new pair of ads that focus on, wait for it, Thomas Mulcair. CTV News received e-mails sowing portions of the new ad, which hit Mulcair on a personal level with attacks like “Hmm, he’s no fresh face,” and “Politicians like him never care when it’s our money.” No word on when we’ll start seeing those ads, but in the meantime, the Conservatives are hitting the NDP in regards to the nearly $3 million spent on satellite offices that has been the subject of so much controversy. Here’s the latest addition to the Conservatives You Tube page.

Speaking of the NDP, Mulcair has released a statement that said he will not participate in any debate that Stephen Harper will not be participating in. The move effectively ends the chance of the consortium of broadcasters hosting a leaders debate in the campaign since Harper and his people have said emphaitically that they will not participate in the traditional broadcast debates hosted by the CBC, CTV, and Global.

Green Party leader Elizabeth May said that the move is a “doublecross” on Mulcair’s part since May has only been invited to one other debate, the Rogers/Macleans debate that’s taking place this Tursday. “Tom Mulcair has just killed the best opportunity that Canadian voters had to get accountability from a sitting prime minister from opposition party leaders in the forum that reaches the most Canadians,” she said.

Trudeau meanwhile said that Mulcair was “behaving a little too much like Mr. Harper, for the Canadians who want change.”

According to the Toronto Star, Harper has an appointment at Rideau Hall Sunday at 10 am with Governor-General David Johnston. The election will likely begin shortly there after.