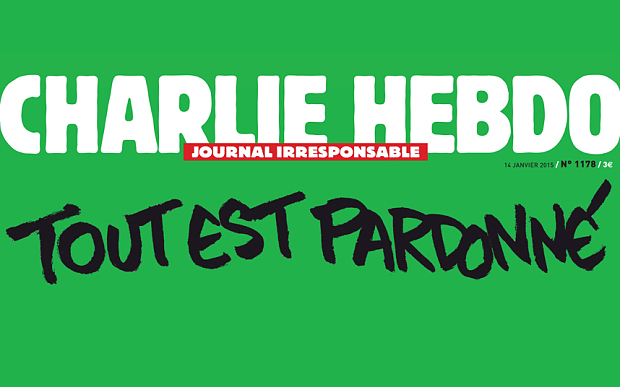 This Thursday, January 15, at 5 pm, Scotty Hertz McWhinnie  and Adam A. Donaldson will discuss:

1) Fallout from Charlie Hebdo. Charlie Hebdo was back on the stands Wednesday, but only for a few minutes before it was sold out. In the wake of the attack on the satirical paper, and the shootout with the suspects that ended with more death and bloodshed barely 48 hours later, the ramifications of this latest terror attack are still being felt here and abroad. Meanwhile, three terror suspects were quickly snatched up here in Canada on the weekend as the government discusses new security measures. Where is this story going next?

2) New Money for Cars, Less Money From Oil. Federal Transportation Minister Lisa Raitt was in Guelph Monday to announce $100 million in funding for Linamar to create 1,200 new full-time positions. It’s further proof that manufacturing in Canada’s industrial centre is rebounding, even as oil prices continue to fall. Suncor Energy is cutting 1,000 jobs, and Alberta is talking about a provincial sales tax for the first time. Is the paradigm changing again? What impact will this economic news have on the coming election?

3) Homelessness in 2015. In Scarborough Tuesday, an unidentified man was found dead in a makeshift home that caught fire, seemingly from trying to stay warm on a cold winter’s night. It’s the third death of a homeless person in Toronto in the last two weeks, and further proof that we’re not doing enough for those most in need, even as new studies suggest again that it’s cheaper to provide free housing for all then maintain the status quo. John Clarke of the Ontario Coalition Against Poverty (OCAP) will join us for a discussion on the subject.

4) Toboggan Terror. Did you hear about Sunday’s protest, the one that struck a blow for freedom? It was in Orangeville and it was about a city move to ban tobogganing. Parents are outraged, and the debate rages in communities across the province: Are local governments acting with an abundance of safety, or is this another example of the encroaching nanny state?

One thought on “Open Sources Show Notes for Thursday January 15, 2015”