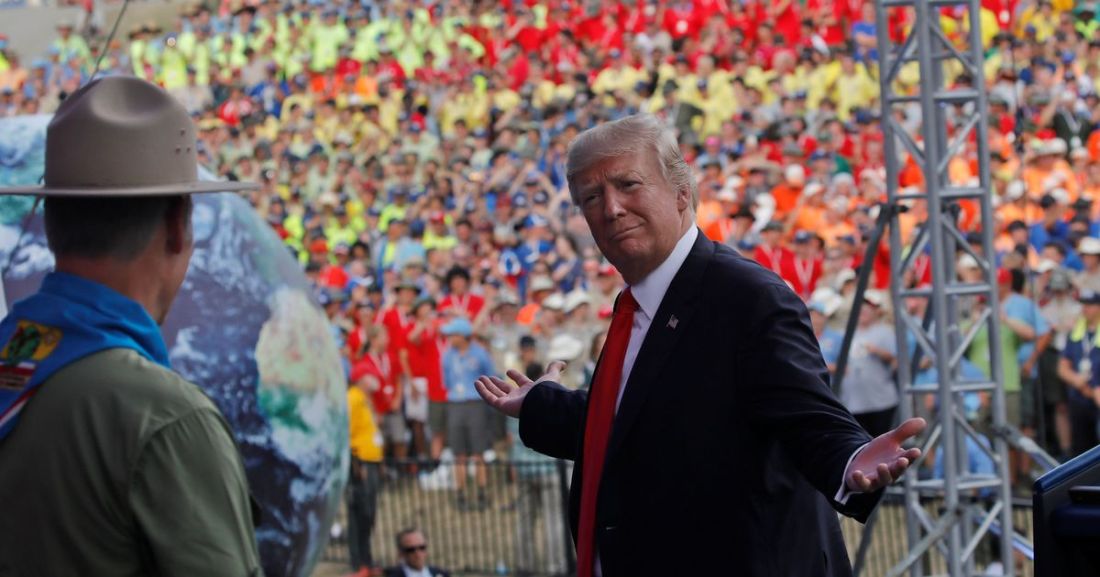 The people have waited long enough, and it is time again for another episode of Open Sources Guelph. On this week’s show, we’ll talk about the man who loves to talk, and talk, and talk, while digging himself into deeper, and deeper, and deeper holes. After that, we’ll look at what’s going on here in Canada. In Alberta, the unification of the right is going about as well as to be expected, Sears employees are mad as hell but there’s not much they can do about it, and there’s a Facebook page with “proud” in the title that might make you feel less proud if you read it.

This Thursday, July 27, at 5 pm, Scotty Hertz and Adam A. Donaldson will discuss:

1) Scout’s Horror. After six months, things have not settled down in Trump’s Washington, and the man is still cramming about a week’s worth of news into every hour of the day whether it’s telling inappropriate stories at the Boy Scout jamboree, or suddenly banning all transgendered people from military service. The most concerning pieces this week though have been President Donald Trump’s attacks on his Attorney General Jeff Sessions, and the Senate Republicans attempt to repeal and replace the Affordable Care Act on a wing and a prayer in three days. We will try and make some kind of sense about another fuster-cluck kinda week in U.S. politics.

2) No Tears for Sears. The news that Sears Canada is on the brink of bankruptcy was not especially surprising, nor was it surprising that several Sears stores will be liquidating immediately and closed up. What is surprising, or maybe not *that* surprising, is that in these final days of Sears, the company decided to give big payouts to their executives rather than fulfill commitments to their employments in the form of pensions and buyouts. Predictably, this caused an uproar among the people, but does Sears even care about their public perception when they’re counting down to their own non-existance?

3) United They Fall? The Alberta Progressive Conservatives and the Wildrose Party have both agreed that they’re going to re-unite the right under one banner called the United Conservative Party because that’s the only way to rid the province of totalitarian rule of the duly elected NDP premier. Now they have to choose a leader, but in the meantime interim leader Nathan Cooper has had to evolve rapidly given his past statements about the LGBT community, and some members of the PCs feel like they’ve got no choice but to abandon their party and start over again. So is UCP the solution Alberta conservatives have been dreaming of, and who can lead such a shotgun marriage?

4) Proud Scary. A Facebook group called “Ontario Proud” now has more likes and followers than the social media of just about every other Ontario politics group on the platform, and that includes the pages of the major parties and the major party leaders. What is it that makes Ontario Proud so darn popular? Well, it’s got humour, it’s got pithy comments, and it captures an impending sense of ennui amongst the electorate and the options they have for next year’s election. But there’s a dark side to a lot, some profound negativity and a lot of the alt-right whistle words and phrases. Is this kind of outlet helpful, or is it another concerning use of the word “proud”.