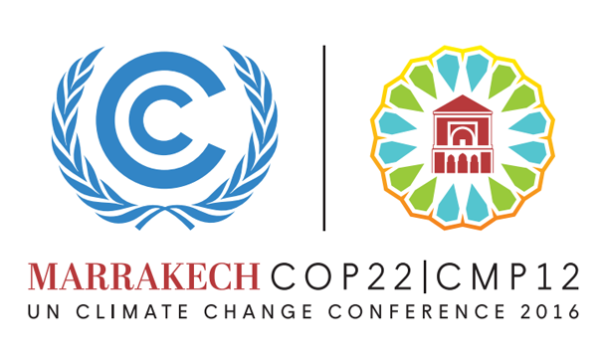 The UN Framework Convention on Climate Change (COP22) took place last month in Marrakech, and Guelph Marijuana Party candidate Kornelis Klevering was there. From him, we’ve got the following report:

The first impression one gets attending the UN climate change conference in Morocco (UNFCCC-COP22) is all the back-slapping and self-congratulating going on amongst the well-dressed banker types aiming to cash in on a low carbon future. COP22 was a sort of trade show capitalist love fest where all types of gadgets, investment portfolios and business opportunities were offered up in multicoloured brochures. If you came seeking alternative climate change models such as community-based, biomass energy farming, a socialist or even a sustainable non-profit approach, then this wasn’t the place for you.

The key objective of COP 22 is to establish a road map that implements the 1.5 degrees ceiling goal set at COP21 in Paris. The Marrakesh conference is suppose to signal an end of negotiations and usher in a transition to an era of action, innovation and mitigation initiatives. To help developing countries achieve the global “climate adaptation agenda,” a $100 billion U.S. Green Climate Fund (or GCF) was established to finance “ankable climate change projects.”

Accessing GCF funds isn’t easy. Developing countries have a compulsory obligation to meet an “eligibility criteria” that is monitored by the World Bank. Acting as its interim trustee, the Bank oversees the release of GCF funds by making sure countries have satisfied the key elements of the criteria which are accounting and financial management, transparency and governance. In response, some African countries have created a triple ‘A’ initiative called the Adaptation of African Agriculture (AAA). It embraces World Bank standards by aiming to “attract the maximum amount of investment possible” both from the UNFCCC and elsewhere.

Not surprisingly, once private companies figured out how to profit from doing “green business,” they immediately applied for UNFCCC observer status. For example, as Miriem Bensalah Chaqroan, CEO of the CGEM (General Confederation of Moroccan Companies) put it, “We seek to benefit from the opportunities of a low carbon economy.” Kamil Benjelloun, head of CBI, an IT solutions company was heard stating “companies are aware that nature can be bankable.”

When I asked Othmane Alaoui of Bookstone Partners, a private equity investment firm, if he would finance sustainable, non-profit projects, the answer was a unequivocal “No, we won’t.” Geoffrey Gibbon of Ernest and Young (from the U.K.) spoke about a “green bond market,” currently worth $48 billion U.S. He explained that international investors had to finance and hold the debt on all those start-up renewable energy projects. So here was an opportunity to get “access to a liquid market” and make some money.

For example, the Moroccan Mehdya Project being built along the Mediterranean Sea north of Rabat best epitomizes this corporate-for-profit, let’s meet the climate change approach. Installing the latest in renewable technologies, this massive five-star hotel complex will cater to the rich by offering a solar powered, sustainable living environment complete with a dream-like setting and a privately run hospital.

At the other end of the spectrum lie the bottom feeders such as the community-based educational groups, environmental activists and disenfranchised NGO’s representing the rural poor. Neither the UNFCCC, nor the private sector, have shown much interest in funding them. For instance, take the Moroccan Horizons School Project which teaches the foundations of sustainability to school children of all ages. These volunteers receive zero dollars from the government nor a penny from an uncle who heads the profitable environmental investment group AKWA.

But then again, under-funding for public education seems the norm in Morocco. Outside, at the famous Jemaa al Fna, school teachers from all over the country were staging a hunger strike against unfair contracts awarded for private education at the exclusion of the public one. I guess somebody has to pay for all that festive COP22 pomp.

Les Femme Moroccaine, Women Gender Constituency and Women for a Sustainable Economy were some of dozens of similar NGOs here fighting for basic climate rights, gender equality, social and climate justice for all. The #climateiswater.org activists were fighting for water/democratic rights similar to those fought for by Guelph’s own Wellington Water Watchers. The High Atlas Foundation (HAF), a women’s educational cooperative, furthered the principles of sustainability amongst their farming cooperatives by propagating walnut and almond trees. Funds were raised at the conference via a ‘carbon auction’ where 500,000 trees were sold off as ‘carbon offset’.

Getting sidelined here are the environment activists, like Mr. Nemo of Oil Watch (Africa), Ken Henshaw from Nigeria or Dr. Tadzio Mueller of Rosa Luxemburg Stiftung (Germany) who advocate ending all extraction and leaving oil in the ground. Common sense dictates oil and coal should be left in the ground as the only sensible way to fight climate change and avoid Eco-cide. They questioned why the UNFCCC had not earmarked any funds for a transition period or constructed a road map for the day when oil extraction stops. And what about funding for sustainable, renewable, non-extraction projects or the plan to upscale, retrain workers and communities for green jobs? They noted that the $100 billion figure was an unexplainable, top of the head, feel good amount not anchored onto anything practical. Why not impose a “climate debt fund” on extractors as a way to raise money for climate change projects? asked Mr. Nemo. Instead, carbon credits were being used to allow polluters to keep right on polluting.

There were NGOs like Amazonia working hard to save the rain forests of the Loretto Area from total destruction. Good luck with that. As reported by Mr. Stolsky of Red Plus (REDD+), there were 16,000 fires set in 2015 alone and the Amazonian forest shrank by 24 per cent. So while the Brazilian government has thrown $600 million to save trees, oil spills by companies allowed to extract have continued to increase. Brazil does not have the legal framework to stop the ongoing raping of the Amazon basin and regional governments are denied access to funding. Simply, there is no transparency involving program sharing or how beneficiaries of GCF funds are chosen.

For me, it were the fancy gadgets on display that really made COP22 feel more like the world’s first “climate correct” trade show. From hydrogen ENV Fuel Motorcycles to Bombardier’s new fuel-saving CS-300 aircraft to curved solar panels and (shockingly) to nuclearforclimate.org, no one could tell me the carbon foot print it took to manufacture these products. Wasn’t that an important consideration? A U.S. self-help group called Tradepal offered a free downloadable app aimed at students looking for used books and car share on-line. That made more sense to me. Morchid Motors brought in their fibre car while BMW and Renault had electric cars on display. Their reps struggled to explain what to do with the millions of dead batteries were that day to arrive.

As I left the conference, it struck me that it sure must have left one heck of a carbon footprint just flying delegates and all that stuff into and then out of Marrakesh. Was this really the way to address climate change? Had it not been extraction capitalism with its mad drive for profits that had brought us global warming in the first place? Instead of enacting plans to end all extraction and fund alternative, non-profit, community -based energy models, COP 22 had embrace the high capitalist road to recovery. An outside observer might easily conclude that the lessons of the past weren’t being learned.