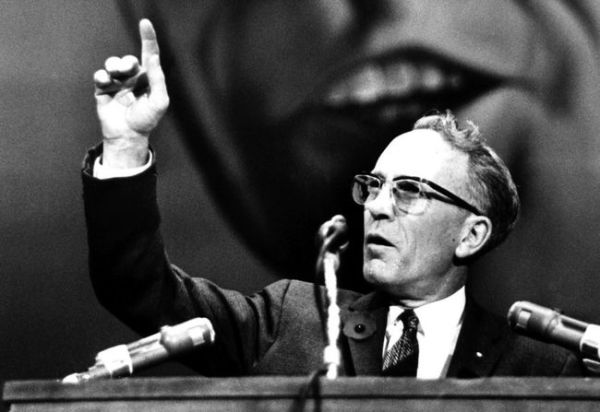 This week, Open Sources Guelph marks Labour Day by taking a break from our labours and remember fondly the time when politicians really did have the best words. We all know that political speeches have the capacity to be uplifting, to make us think, to engage us and spur us to action – and not just in the movies. That kind of rhetoric has been at a premium this election cycle in the United States, but it still exists, at least in the archives. So as Adam A. Donaldson takes the week off to engage with fellow nerds at Fan Expo Canada, Scotty Hertz will countdown the greatest hits… of political speeches.

This Thursday, September 1, at 5 pm, Scotty Hertz will discuss:

Some of his favourite political speeches of all time, and he’s reaching deep back in time for some of these clips. In 1944, on the eve of his historic victory leading the Co-operative Commonwealth Federation in Saskatchewan, Tommy Douglas made his famous “Mouseland” speech, a compelling critique of the Canadian political system that’s as apt now as it was then. Scotty will also play clips from John Diefenbaker as he reflects on his friendship with Winston Churchill, Lester Pearson’s speech announcing his retirement, and outtakes from the 1968 leaders’ debate, which included some very interesting (and enlightening given the times) perspectives on gun control. Chances are though that Scotty won’t be playing this, the best speech ever given by an American president.