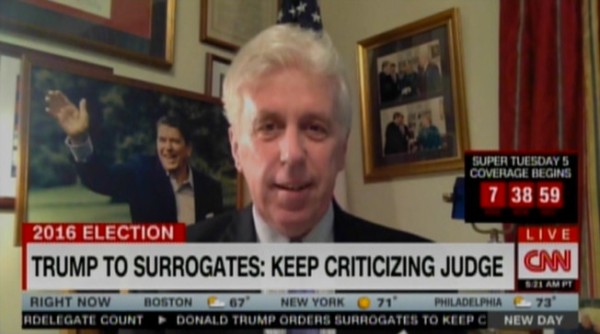 A few months after he secured the nomination, and several weeks after he was official made the Republican candidate for President of the United States, it seemed like Donald Trump finally made the pivot to the general election this week. Of course, if he waited much longer, the November election would have looked more like a coronation for Hillary Clinton, but as the man said, better late than never. While Republican party heavyweights like Paul Ryan and Mitch McConnell may be the most relieved ,or – if only for a moment – slightly less concerned about a full GOP repudiation in three months time, the most relieved must be Trump’s spokespeople, who get a break from having to defend the insanity.

But who are we kidding? These people create their own insanity. Let’s take a popular example in Katrina Pierson, the inexplicable choice for national spokesperson of the Trump campaign. If she seems, at times, not all there, she might well be. She claims to have voted for Barack Obama in 2008, but then immediately joined the Tea Party in 2009. You might call it “buyer’s remorse”, but as noted in a Daily Show takedown this week, you can’t get buyer’s remorse when you’re shoplifting. She did work to get Ted Cruz to the senate in 2012, but now she works for a man who attacked her former boss on a personal level twice by going after both Cruz’s wife and father.

Having said all that, it should come as no surprise this week when Pierson followed the personal attack policy of Dear Leader Trump and indulged in the Clinton health conspiracy. On MSNBC Thursday, she said that “reports of observations of Hillary Clinton’s behavior and mannerisms” show that she suffers from dysphasia, which is described as “a partial or complete  impairment of the ability to communicate resulting from brain injury.” Perhaps Pierson was projecting. One week earlier, she accused Obama of starting the Afghan war 11 years after it was started by Obama’s predecessor George W. Bush. Pierson blamed the misunderstanding on audio issues, an excuse equally unbelievable when Trump didn’t repudiate David Duke live on CNN earlier this year. Audio problems seem de rigueur for the Trump campaign for some reason.

At least Pierson has a title and position in the Trump campaign, which, while frightening to comprehend, is at least a reason to have her on TV; the reason why Kayleigh McEnany does 26 hours a day on CNN is still something of a mystery. Credited as a “Trump supporter”, a Harvard law grad, and a contributor to a who’s who of “What the…?” rightwing websites, McEnany has created a cottage industry for herself by impossibly spinning ever lead brick that comes out of Trump’s mouth into gold. Not bad for someone who said last summer that Trump ought to “tone it down” before he became “another Todd Akin.”

This past week, McEnany had Trump’s back after he tried to reach out to black voters in front of mostly white audiences in mostly white towns, and credited her candidate with being on “the cutting edge of civil rights” by letting black and Jewish people into his Florida golf club. This was a light week for McEnany who like any good Trump supporter enjoys being on the attack, like she was on August 10 in a CNN segment discussing the attendance of Seddique Mateen, father of the Orlando nightclub shooter, at a Clinton rally. Clinton supporter Christine Quinn took exception to McEnany’s assertion that one random guy at a political rally was an admission of tacit support for the wholesale slaughter of over four dozen people, but McEnany sat there grinning like Syd from Toy Story, the kid next door to Andy that like to torture his toys. Forget Margot Robbie, McEnany should have been cast in Suicide Squad as Harley Quinn because she looks like she’s legitimately been tortured by a menacing clown.

The elder statesman of Trump spokespeople though is Jeffrey Lord, who worked as a staffer for Ronald Reagan back in the day, and, like a lot of 80s-era conservatives, has elevated the 40th President to near godly status. Regularly Skypeing in to CNN from a room covered by Reagan regalia – presumably kleenex and lotion are off frame – Lord offers increasingly troubling and ill-informed spin on Trump’s behalf, most recently following Trump’s “sarcastic” declaration that Obama is the founder and MVP of ISIS. As Lord spun in defense, retired Lt. Gen. Mark Hertling declared Trump’s (and Lord’s) evaluation of the War in Iraq – and Obama’s culpability in the creation of the Islamic State – as “semantically incorrect” and that Trump (and Lord) has “shown repeatedly an inability to understand this as a complex issue.” Lord has supposedly been on vacation ever since on Long Island, where people know how to get sarcasm, he actually said.

So how do such people end up on the supposed “nation’s news leader” spouting ill-informed, untrue, and often quite moronic statements that detract from the equally cavalier statements of the candidate they’re defending. After hiring former Trump campaign manager Corey Lewandowski, who may or may not have some sort of formal role in the Trump campaign depending on who you ask, CNN President Jeff Zucker said, “The reason we hired Corey is that now that we are in the general election, I think it’s really important to have voices on CNN who are supportive of the Republican nominee. […] It’s hard to find a lot of those.”

How about this Jeff, why have any campaign supporters, of any campaign, as paid contributors on your so-called news network? How about independent analysis offering thoughtful and insightful commentary instead of badly veiled spin by campaign veterans with tenuous or direct ties to a candidate? CNN’s been tipping this way for years; back in 2004 at the height of the swift boat controversy, Wolf Blitzer’s idea of analysis was to bring on a Democrat and a Republican, show them the “Swift Vote Veterans for Truth” ad, have them duke it out with partisan attacks for five minutes, take a commercial, and do it all over again. At no point were the holes in the ad’s truthfulness addressed, and instead the whole thing was staged as a partisan slap fight, which might as well, at this point, be the actual title of most CNN shows.

This week saw a shake-up at Trump HQ that’s either going to right the ship, or put Trump in a prime position post-election loss to chase new business opportunities like his own far right media empire. Despite his usual tendency to bloviate, Trump has managed to stay blissfully on message the last week, but it remains to be seen whether this is discipline taking hold, or a just a break from the crazy so that the candidate can save up for the post-Labour Day campaign. One thing’s for sure, Trump’s built a well-oiled crazy machine, and it’s unlikely to breakdown anytime soon.