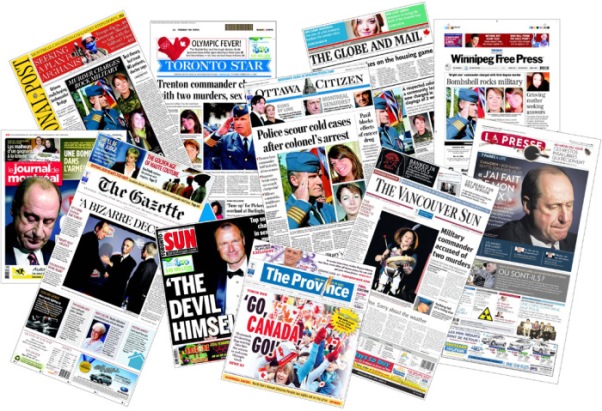 Last week will go down as the seven day stretch that saw the passing of both David Bowie and Alan Rickman, but there was another “death” last week that portends very tough times for this increasing shattered and intangible media landscape. In Canada, and the United States, media companies once again had their knives out as the hammer fell on hundreds of media jobs on both sides of the border. (I know we’re mixing metaphors there, but it’s been that bad.)

Al Jazeera  – After two years, the American version of Al Jazeera is suddenly calling it quits as of the end of April. Citing plummeting oil prices and a highly competitive American news market, company bosses couldn’t justify the continuation of the U.S. iteration of the network. Strangely, it shadows the fate of CurrentTV, the former left-leaning news network co-owned by Al Gore that was sold to Al Jazeera in 2011, and whose space on the dial Al Jazeera currently occupies. With the network topping out at 40,000 nightly viewers, the writing was on the wall, Al Jazeera was too “straight” for American viewers, too “old school” in the way it incorporated the digital side of media coverage, and despite the dedicated staff that believed wholeheartedly in doing news the old-fashioned way, 700 of them will be out of a job by May 1.

Toronto Star – In what maybe a terribly pronounced and obvious sign of the times, the Star is selling its printing plant in Vaughan and is outsourcing its printing needs to Transcontinental, Canada’s largest commercial printing company. As consequence, 220 full-time and 65 part-time employees will be out of work by July 1. “This is an important step for the Toronto Star, but unfortunately it also means we will be saying goodbye to our long-time Vaughan printing plant employees,” said Star publisher John Cruickshank rather flatly in a statement Friday. The move is expected to save the Star $10 million per year in operating costs.

But that’s not all for the Star. Canadaland is reporting that layoffs have begun in the Star newsroom, in what is the first phase of a $22 million restructuring. The first people to go are 10 people working on the Star tablet edition Star Touch, and three others working in digital news. The Star memo from editor Michael Cooke points out that 12 of those 13 were contract workers who simply won’t have their contracts renewed, but the move to cut the 10 Touch jobs comes as slightly shocking given that the Star launched the app last fall with much fanfare. Slightly.

PostMedia – So this is kind of scary (if you work for an Ottawa newspaper). BuzzFeed UK got a hold of an email wherein Postmedia chief executive Paul Godfrey desperately asks for a phone meeting with Ottawa Mayor Jim Watson for today, and many are supposing that this means that job cuts are coming. Ottawa, like many cities in Canada, have two daily newspapers now owned by PostMedia, and a memo from Godfrey last week said that “Where we can remove duplication — we must,” and that “tough choices that give us our best chances for the future.” Last week it with announced that the media company lost $22.2 million in revue in the last quarter, so Postmedia is adding another $30 million to it’s previously planned $50 million in cuts by fiscal 2017, and some people are reading that as deep job cuts, if not the wholesale shuttering of newspapers, are coming soon.

HuffPost Live – The eight-hours daily streaming video “news network” will be discontinued after a memo from HuffPo founder and editor Arianna Huffington was released last week saying that the company will be “shifting resources” to more “shareable” video and long-form documentaries. A source with the site told CNN that despite the company’s investment and commitment to HuffPost Live, which was launched in 2012, “We all came in with the ‘if you build it, they will come’ mentality, but we built it and no one came.”

New Republic – Interested in buying a 100-year-old American current affairs magazine? Well, you’re in luck. Facebook co-founder Chris Hughes bought the New Republic three years ago, but “after investing a great deal of time, energy, and over $20 million,” he’s “come to the conclusion that it is time for new leadership and vision at the New Republic.” The magazine was subject to a mass exodus of editorial staff in late 2014 when editor Franklin Foer was unceremoniously replaced Gabriel Snyder of Gawker fame. The 10 contributing editors feared a dumbing down of the New Republic and being turned into a click bait obsessed digital enterprise.

One thought on “Well that Was a Terrible Week for Media”