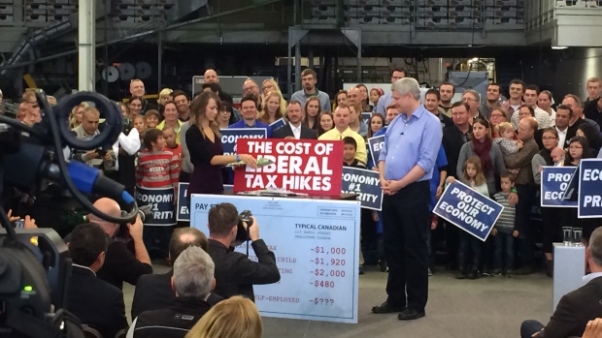 Going into the final week of the 2015 election, it seems as though the pressure may be finally getting to Prime Minister Stephen Harper. The Conservative leader was in Kitchener today doing campaign-y things like going to KW-Oktoberfest and taking in a Kitchener Rangers OHL game, but in between that he wanted the voters in a strategically vulnerable area for the incumbent government to know just what exactly a Liberal government, if elected, was going to cost them. To do that, Harper made the unusual decision to become a prop comic at the dawn of the last week of the campaign.

While at the Martin’s Family Fruit, an apple farm in the riding of Kitchener-Conestoga, Harper invited fitness instructor Nicole Ropp to demonstrate how much her family would lose if the Liberals took away the Conservative’s boutique tax cuts. “The Liberals have been clear this is money they will take away. As Conservatives we believe the Ropps should keep that money,” Harper said as Ropp put one $20 bill on the table after the other as an old-fashioned cash register ka-ching rang out.

It was an unusual move of whimsy from a man who’s not really known for such, and it comes after Harper’s “tax lock” promise last month that feature a large blue safe as part of the PM’s announcement that, if re-elected, the Conservatives will pass legislation that prevents the federal government from raising taxes for four years. “This new legislation will protect our fragile economy and guarantee reduced taxes and stable incomes for our families,” Harper said before symbolic slamming the safe door on tax hikes.

I was wondering, does all this seem familiar? Remember the 2003 Ontario provincial campaign where NDP leader Howard Hampton tried a similar strategy of events with a “visual theme?” He held up a big wooden piece of Swiss cheese to show that the Liberal energy platform was “full of holes”; he tried to nail Jell-O to the wall to demonstrate that Liberal leader Dalton McGuinty was hard to pin down on certain issues; and he had a hilariously enormous dollar sign sack be driven away on a flatbed truck to illustrate good money being spent after bad on government tax breaks.

So is Stephen Harper purposefully trying to a prop comic politician, and does he realize he’s emulating a failed NDP politician from Ontario in these campaign gags? Is this a sign of desperation or over-confidence? Tough to say.