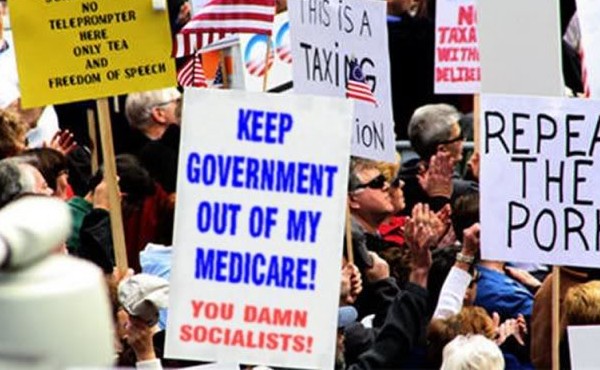 Monte McNaughton pulled the plug on his campaign to be leader of the Progressive Conservative Party of Ontario last week, which is okay because really the biggest name he had on his side was one Robert Bruce Ford. “I’m tired of seeing the same-old, same-old people running our party — that’s why we haven’t won an election since 1999,” said the Lambton-Kent-Middlesex MPP after stepping down. Here’s the problem, neither McNaughton, nor that man that has received his endorsement, Patrick Brown, exactly represent the new-different, new-different voice that McNaughton was referring to.

Google the terms “Tim Hudak” and “Tea Party” together and you get about 10,000 hits. Some of those references go back to 2011, when the Tea Party conversion of the American Right was at full volume, and the tide of cut first/ask questions later seemed unstoppable, even by the U.S.-Canadian border. And it wasn’t just the usual suspects of progressives and lefties that were painting Hudak that way, the Ontario Provincial Police Association took the unprecedented step of taking out ads against Hudak in last year’s provincial election saying, “We work hard every day. We risk our lives. Tim Hudak says he’s a friend but Tim wants to cancel our contract, cut our pay and cut pensions for new hires.”

Police officers and the people who work for the police should be bread and butter for the PCs. Even as the OPP were, and are, investigating the Ontario Liberals role in the gas plant scandal, the more pressing concern was Hudak’s pledge to eliminate 100,000 public sector jobs, some of those, likely, would have been OPP jobs. Many PC candidates were quick to point out that they’ve never been popular with unions, but this was a police union, even if law and order weren’t a wholly-owned Conservative value, police rarely if ever turn political. So what made the difference that time?

You can blame the 100,000 lost jobs pledge, but there was also a bit of cognitive dissonance at play. On the stump, Hudak told personal stories about him, his father, and pulling themselves up by their bootstraps, fortunes and fates made through hard work and no handouts. The narrative was weird, preaching the virtue of work and the promise of a good job while robbing 100,000 people of their good jobs. That didn’t make a lot of sense.

But the job-loss pledge was just the coda to several years of floating Tea Party-ish policy ideas. Among Hudak’s numerous white papers was one that outlined several changes to post-secondary education including approving five per cent tuition fee increases, more money for “elite programs,” and financial aid tied to good grades. Another white paper, by far the most controversial, proposed a number of changes to Ontario labour law that would have been similar to what is euphemistically called “right-to-work” legislation. Tea Party bastions like Indiana, and Tea Party luminaries like Wisconsin Governor Scott Walker, both embraced “right-to-work” enthusiastically.

Which brings us to McNaughton and Brown, and the ugly specter of social conservatism which has become synonymous with Tea Party politics. When the Liberal government announced the new sex ed curriculum back in February it didn’t take long for that side of the PCs’ personality to emerge, with McNaughton getting the most quotable bit of misguided criticism when he said in the legislature, “it’s not the Premier of Ontario’s job, especially Kathleen Wynne, to tell parents what’s age-appropriate for their children.”

Although he’ll deny it, when McNaughton said “especially Kathleen Wynne,” most people took that to mean “because she’s a lesbian.” Forget the fact that Wynne is a mother and grandmother several times over, and thus just as much eligible to have a say on the issue, but clearly, whether he meant to imply homophobia or not, McNaughton said the wrong thing in the worst possible way. Strangely though, that wasn’t the most radical thing said at Queen’s Park during that period.

Chatham—Kent—Essex MPP Rick Nicholls was also critiquing the government revisions to sex ed – revisions that haven’t been made in 20 years by the way –  after McNaughton had an exchange with Education Minister Liz Sandals. McNaughton suggested that school boards should be able to opt out of the new curriculum, which Sandals likened to letting schools opt out of teaching evolution. “Not a bad idea,” shouted back Nicholls. It was a move interim PC leader Jim Wilson said “obviously didn’t help our position.”

So who is Nicholls and what does it matter if one guy in the Ontario legislature doesn’t believe in evolution  despite it being the accepted theory on the development of life on this planet for 99.99999999 per cent of scientists? Because he is the co-director of the Patrick Brown campaign. The same Patrick Brown that Monte McNaughton just threw his support behind.

So who is Brown? Well, he’s been a backbench MP from Barrie since 2006, and has been very involved in Conservative party politics and community events like Hockey Night in Barrie for years. All very admirable. But as Matt Guerin on Loonie Politics pointed out, how has this guy been in the House of Commons for nearly 10 years, represented a key Ontario riding, and seemingly not ever gotten within sniffing distance of a cabinet seat?

Instead, Brown’s gotten into trouble for taking credit for creating the Hockey Night in Barrie fundraiser, a yearly event that raises money for the Royal Victoria Hospital. He also drew with ire of the Canadian Taxpayers Federation, another key Tory constituency, for misusing his mailing privileges to help a Barrie city councillor get re-elected. He also voted in favour of Stephen Woodworth’s private member’s bill to re-define a fetus as a human.

“They are much more on the right-wing side of the party and socially conservative, and I think really out of touch with mainstream Ontario,” said Christine Elliott, who has been, and remains, the front-runner in the PC leadership race. Elliott now finds herself cast as a moderate, and in campaigning for the PC leadership she has said that she’s less interested in proving where she is on the political spectrum than she is in coming up with new ideas to Ontario’s old and new problems alike.

Unlike Americans, Canadians generally tend to tire of fighting the battles of the past that were already won (or lost). Issues like abortion, or gay marriage, or evolution, can’t find traction because they’re settled, the experts have weighed in, had their say, and the governments and/or courts have decided. Done. Let’s move on. And although the opposition to the new sex-ed legislation is loud, one cannot dispute that the world kids are growing up in in 2015 is markedly different that the one I grew up in 1995. Cell phones, the internet, and the open acceptance of homosexual relationships all being obvious examples.

With the Federal Conservatives facing significant problems in trying to secure their majority foothold in Ontario, help for the Ontario PCs is unlikely to come from the House of Commons, and Ontario’s majority urban population is almost completely disinterested in fighting the culture wars on home soil. To win, PCs need to look to the future, and not the past, and they’re going to have to look at solutions and messaging inside our own borders because what works in Indiana, Wisconsin or Alberta is just not going to work here, as Hudak learned to his detriment. Twice. There is no Ontario Tea Party, and if Brown doesn’t know that, then Elliott’s going to walk to victory.

Ontario’s Progressive Conservatives will choose their new leader on May 9.