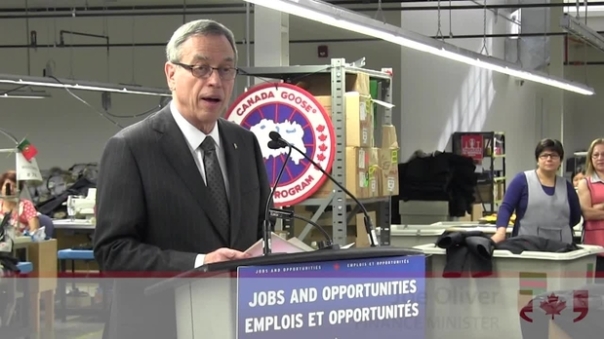 After weeks of badgering from the Opposition, Finance Minister Joe Oliver finally set a date to announce the next federal budget. On April 21, Canadians will learn what exactly the Harper government has in store in their final financial statement before this fall’s election, and how exactly the incumbent Conservatives plan on balancing the budget as well as delivering the new spending they’ve announced in the midst of an economic downturn.

“We needed to assess the implications of the dramatic fall in oil prices and its instability on the Canadian economy and on our fiscal framework,” Oliver explained referencing the delay in announcing the budget. “[W]e needed the time to obtain as much information as possible to make reasoned fiscal decisions and receive current forecasts from our independent economic advisors whose projections we rely on. […] We now have the information we need to make informed decisions.”

In an unexpected move, Oliver announced the budget date before reporters on the premises of the outerwear manufacturer Canada Goose, whose CEO, Dani Reiss, sits on Oliver’s economic advisory council. Setting such an important announcement outside the House of Commons was the cause of some discussion, especially since many have noted the absence of Oliver in Parliament during Question Period lately. Oliver first made reference to a delay in announcing the budget back in January, which is typically tabled by the government in February. The end of the federal government’s fiscal year was March 31st.

Meanwhile, Bank of Canada governor Stephen Poloz warned investors Monday that the outlook for Canada’s GDP numbers for the first quarter of 2015 looked “atrocious.” Oliver’s next step will be to meet with private sector economists in the coming week, to further solidify the revenue numbers that will be posted in the budget.